BERLIN (AP) — Germany’s president appealed Wednesday to hesitant compatriots to get vaccinated against COVID-19, adding to efforts by top politicians to reinvigorate the country’s inoculation campaign as infection numbers have begun to creep higher.

Although case numbers remain very low — currently around seven weekly new cases per 100,000 residents — they have been edging up for a week, and German leaders are wary of worse to come now that the more contagious delta variant is dominant. And the number of people getting shots has slipped in recent weeks.

By Tuesday, 58.9% of the population had received at least one shot and 43.7% were fully vaccinated. But Germany’s disease control center said last week that the country should aim to vaccinate 85% of people ages 12-59 and 90% of over-60s to prevent the delta variant from causing a resurgence of cases this fall and winter.

“Many could hardly wait for the vaccine appointment, like myself,” Steinmeier said. “Many struggled with themselves and then decided in favor — and thanks for that. What matters now is as many as possible follow their example.”

“I ask all those who are still uncertain: get yourselves vaccinated,” he said.

“Only when even more people in our country have received full vaccine protection is our common aim achieved,” Steinmeier added. “Only then will virus variants such as the current delta variant not force us into new restrictions; only then are we protected with great certainty against serious and fatal developments of infections.”

Merkel has said that Germany doesn’t plan to introduce compulsory vaccinations for some professions, as France and Greece are doing, but hasn’t ruled out the possibility in the future.

One concern for politicians is preventing infections among schoolchildren once classes resume after the summer break. There is currently no vaccine approved for under-12s and many other young people still aren’t vaccinated.

Federal and regional authorities have faced persistent criticism for having no coherent plans to keep schools running smoothly during the pandemic. 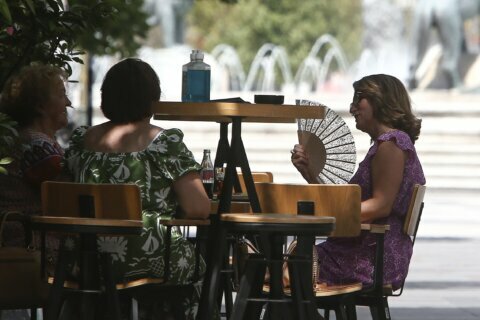