BERLIN (AP) — Around 600 investigators searched 31 buildings in the western German state of North Rhine-Westphalia and police arrested a family of four Tuesday in connection with alleged money laundering, organized crime and welfare fraud.

Police and special units from the state office that investigates organized crime arrested a 46-year-old man, his 42-year-old wife and the couple’s two sons, 24 and 28, at the family’s mansion in the city of Leverkusen. None of their identities were released in line with German privacy rules.

Police said the family is accused of defrauding North Rhine-Westphalia of about 400,000 euros ($487,000) in social welfare benefits while living in the million-euro house.

The investigators also raided homes, offices and stores in Duisburg, Leverkusen, Gelsenkirchen and other cities in the Rhineland and Ruhr Valley, German news agency dpa reported.

About 100 people were inside the hotel at the time of the raid, local media reported.

The raids in Berlin and western Germany did not appear related to a global sting operation announced Tuesday that involved an encrypted communications platform developed by the FBI. 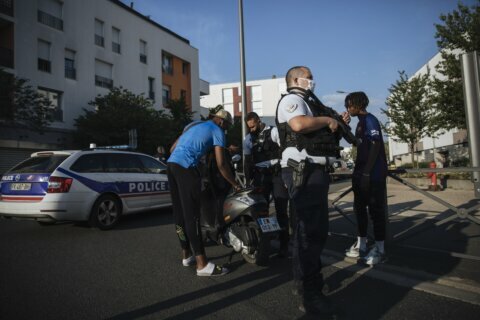 AP PHOTOS: On patrol with police in Paris’ tough suburbs