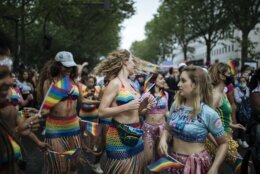 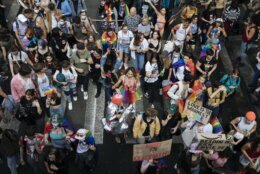 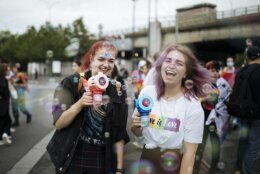 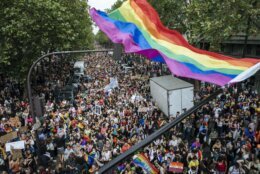 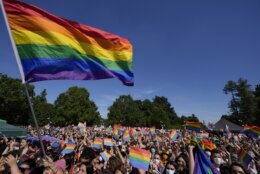 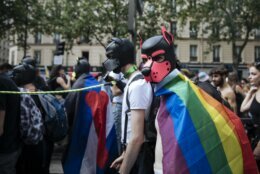 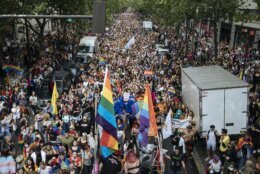 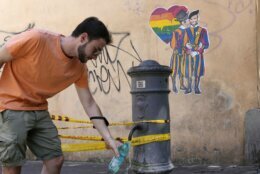 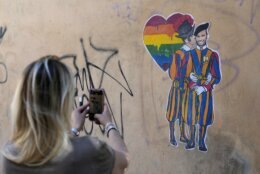 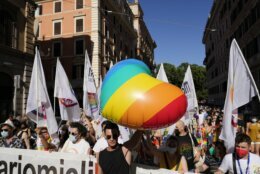 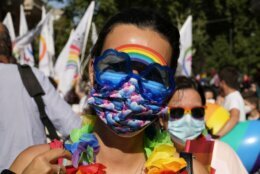 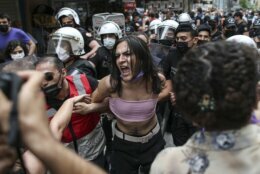 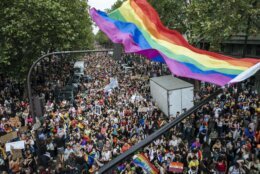 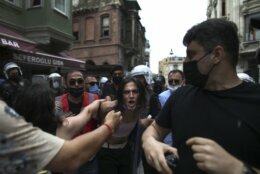 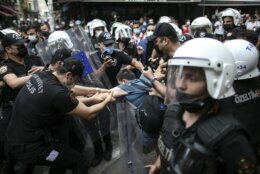 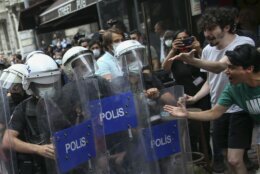 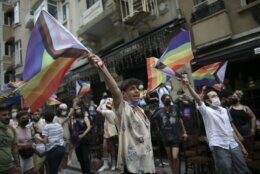 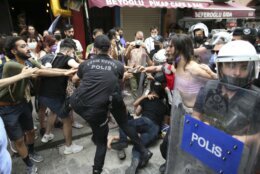 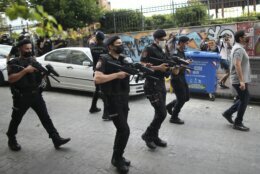 ROME (AP) — Police in riot gear on Saturday blocked streets to try to thwart gay Pride marchers in Istanbul, while thousands turned out joyfully in Paris and elsewhere in Europe after pandemic privations — although setbacks against LGBT rights tempered some of the celebratory air.

In Berlin, demonstrators set off on three routes toward the central Alexanderplatz in a format meant both to avoid bigger gatherings during the pandemic and to reflect the diversity of the LGBT community.

In Italy, thousands of Pride celebrants rallied in Rome and in some smaller cities.

With a proposed law to combat hate crimes against LGBTQ people stalled in the Italian Senate for months, the Vatican and right-wing political leaders have been lobbying to eliminate some of the provisions, citing fears the legislation will crimp freedom of expression.

After it became public that the Vatican earlier this month had raised objections to Italy’s embassy to the Holy See over some of the bill’s aspects, the Holy See tried to defuse anger by insisting it doesn’t want to block passage. But its No. 2 official, Cardinal Pietro Parolin, expressed concern that the legislation could leave open to prosecution those expressing opinions about “any possible distinction between man and woman.”

Proponents of the law retort that the threshold for prosecution is inciting hatred or violence against the protected classes. If approved, the Italian law would also combat discrimination and hate crimes against women and persons with disabilities.

Camille Fois, 25, traveled to Paris from the Alpine city of Annency to take part in her first Pride march. Speaking about the Hungarian law, she expressed concerns shared by many rights advocates in the European Union.

“It can happen to us very quickly. It’s not as far away as that,” she ventured.

The overarching mood among tens of thousands of participants at the Paris event was of celebration after nearly a year-and-a half of pandemic-triggered restrictions on gatherings and socializing.

Singing along to ”I Kissed a Girl” by Katy Perry, people danced in one of the Metro trains that carried them to the rallying point. With half of French adults now having had at least one vaccine jab, many no longer felt the need for face masks and partied with abandon.

“Being locked away was hard,” said Georges Gregoire, 33, who came with his partner from Lille. “I wanted to have fun.” Gregoire, a nursing student, moved to France from Haiti, where, he said, he was so miserable and ostracized as a gay man that he contemplated suicide.

Salv, who didn’t want to give his full name because he doesn’t want it widely known that he is HIV-positive, marched with a placard that read: “40 years of waiting for a vaccine.” He said he is optimistic that research poured into coronavirus vaccines will boost prospects for a vaccine against HIV.

Milan Mayor Giuseppe Sala, at that city’s march, said he was concerned that those raising objections to the bill to combat homophobia are seeking to discuss it only to stall and ultimately kill it.

Sala said he was championing a push for passage of the law and “the just rights for all this marvelous community.”

Many participants in Paris expressed alarm about rollback of rights in Hungary and Poland, two EU nations led by right-wing governments.

“If European leaders tolerate this, what’s to stop them from tolerating that at home? said Mornia Paumelle—Pichon, a 26-year—old illustrator.

Last year, Poland’s president declared that the term LGBT didn’t mean people but an ideology more dangerous than communism, a reference to that nation’s several decades in the Soviet bloc.

In North Macedonia, hundreds of people marched through the capital, Skopje, as the Balkan country hosted its second-ever Pride parade. The crowd carried a large rainbow banner, blew whistles and cheered and danced to music playing from a vehicle with loudspeakers.

The parade was held under the motto “Out of the walls!” No violence or similar incidents were reported.

Last year, North Macedonia’s parliament adopted an anti-discrimination law, seen as the cornerstone of a decade-long struggle by civil society to ensure the protection of the country’s most vulnerable and marginalized communities.

John Leicester reported from Paris. AP reporters Andrew Wilk in Istanbul, and Geir Moulson in Berlin, contributed to this report.