A rare tornado believed to be the most devastating in the Czech Republic’s modern history has torn through the country's southeast, killing at least five people and injuring hundreds, rescue services and police said on Friday.
Listen now to WTOP News WTOP.com | Alexa | Google Home | WTOP App | 103.5 FM
(1/9) 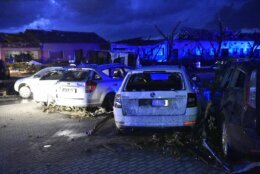 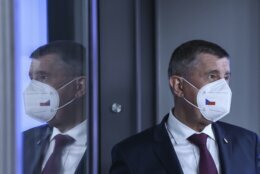 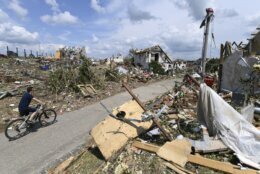 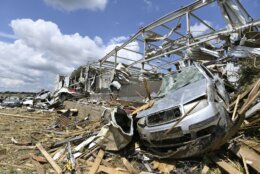 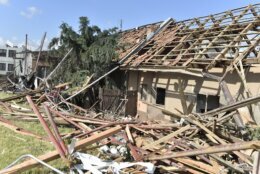 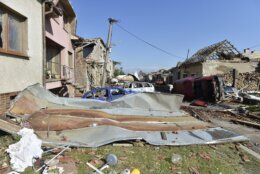 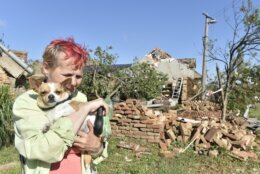 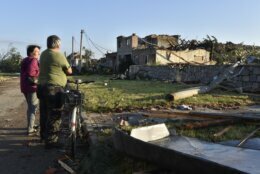 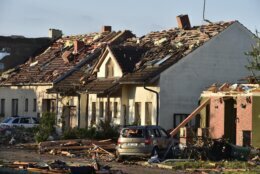 PRAGUE (AP) — A rare tornado believed to be the most devastating in the Czech Republic’s modern history has torn through the country’s southeast, killing at least five people and injuring hundreds, rescue services and police said on Friday.

The tornado touched down late Thursday as strong thunderstorms hit the entire country. Seven towns and villages sustained heavy damage that included buildings turned to rubble and overturned cars. The storms were accompanied by hail which in some cases was as big as tennis balls.

Hrusky Deputy Mayor Marek Babisz told Czech public radio that half of his town was almost completely wiped out.

“The church is without the tower, the elementary school has no roof and insulation any more, only walls remain from what were houses … It’s really terrible.”

Some 360 extra police officers were dispatched to the area, along with army personnel. Rescue crews from across the country, joined by counterparts from nearby Austria and Slovakia, were using drones, helicopters and sniffer dogs to search through the rubble.

“It’s a huge tragedy,” Prime Minister Andrej Babis said. Babis was in Brussels to attend an EU summit and was planning to visit the afflicted region later Friday. He said he has asked the EU for help.

“I’d like to offer my condolences to the families of the victims,” Babis said. “We … will do all we can to help the people because it’s a real apocalypse.” He said some 2,000 buildings have been damaged.

Over 40,000 households remain without electricity in the southeast.

Meteorologist Martin Setvak said it was the most damaging tornado in the country’s modern history.

“It certainly was at least the strongest F3 intensity but very likely it was F4” in the six-notch Fujita scale, Setvak said.

F4 causes devastating damage, with winds of up to 260 miles an hour.

Setvak said it’s still unclear whether it was a single twister or several independent ones.

According to Setvak, the country experienced anywhere between one and seven tornadoes annually up until 2020, but all were relatively weak.

“Tornados like this are very rare in Central Europe,” climatologist Pavel Fasko said.

Tobacco CEO sees end to cigarettes in Britain in 10 years