Top US, Russia diplomats spar firmly but politely in Iceland

Top diplomats from the United States and Russia are set to square off this week in Iceland for their first face-to-face encounter that comes as ties between the nations have deteriorated sharply in recent months.
Listen now to WTOP News WTOP.com | Alexa | Google Home | WTOP App | 103.5 FM

REYKJAVIK, Iceland (AP) — Top diplomats from the United States and Russia sparred politely in Iceland on Wednesday in their first face-to-face encounter, which came as ties between the nations have deteriorated sharply in recent months.

U.S. Secretary of State Antony Blinken and Russia’s longtime Foreign Minister Sergey Lavrov spoke frankly but calmly of their differences as they held talks on the sidelines of an Arctic Council meeting in the Icelandic capital of Reykjavik, a city with deep history in U.S.-Russian relations.

“We seek a predictable, stable relationship with Russia,” Blinken told Lavrov, echoing comments made by President Joe Biden, who has proposed a summit with Russian leader Vladimir Putin next month. “We think that’s good for our people, good for Russian people and indeed good for the world.”

“It’s also no secret that we have our differences and when it comes to those differences, as President Biden has also shared with President Putin, if Russia acts aggressively against us, our partners, and our allies, we’ll respond — and President Biden has demonstrated that in both word and deed, not for purposes of escalation, not to seek out conflict, but to defend our interests,” Blinken said.

The meeting took place just as the Biden administration notified Congress of new sanctions on Russia over a controversial European pipeline. The administration hit eight Russian companies and vessels with penalties for their involvement in the Nord Stream 2 pipeline, while sparing two German entities from similar penalties, which would have a more significant effect on the project.

“We have serious differences in the assessment of the international situation, we have serious differences in the approaches to the tasks which have to be solved for its normalization,” Lavrov said. “Our position is very simple: We are ready to discuss all the issues without exception, but under perception that the discussion will be honest, with the facts on the table, and of course on the basis of mutual respect.”

Even before Wednesday’s talks the two diplomats had laid down near diametrically opposed positions for the meeting, previewing what was likely to be a difficult and contentious exchange over myriad issues including Ukraine, the Arctic, Russia’s treatment of opposition figure Alexey Navalny and accusations of cyber malfeasance, including claims that Russia-based hackers were responsible for a ransomware attack on a key U.S. pipeline.

The meeting also followed a spate of tit-for-tat diplomatic expulsions as U.S.-Russian relations threaten a return to Cold War lows.

After the meeting, which ran for a longer-than-expected hour and 45 minutes, the State Department said Blinken had called for Russia to release two Americans it holds, Paul Whelan and Trevor Reed. He also raised “deep concerns” about Russia’s military buildup on the Ukraine border and its actions against the Voice of America and Radio Free Europe/Radio Liberty, the department said.

Lavrov, meanwhile, told Russian reporters after the meeting that the talks had been “constructive” and that Russia has proposed starting a new and broad strategic dialogue. “There is a lot of rubble, it’s not easy to rake it up, but I felt that Antony Blinken and his team were determined to do this. It will not be a matter for us,” he said, according to the news agency Tass.

A senior U.S. official called the meeting “a good start” with “no polemics” that had allowed both sides to “tee-up a lot of the issues that the two presidents may have the opportunity to discuss.” But, neither side offered any update on progress toward a Biden-Putin summit, saying only that discussions about its logistics continue.

Perhaps anticipating Blinken’s position and the expected sanctions announcement, Lavrov had offered a prebuttal at a news conference Monday in Moscow.

“Apparently, a (U.S.) decision was made to promote stable, predictable relations with Russia,” he said. “However, if this includes constant and predictable sanctions, that’s not what we need.”

Blinken said his meeting with Lavrov would be an important opportunity to test the proposition that the U.S. and Russia can work collaboratively on certain issues, like climate change, the Mideast, Iran and North Korea, despite bitter disagreements on others. The meeting comes as much of the world is focused on the Israel-Palestinian war.

Blinken noted that despite the vitriol, the U.S. and Russia had agreed early in the Biden administration to a five-year extension of a key arms control pact that President Donald Trump had declined to renew before he left office. Trump left a decidedly mixed legacy on Russia that included a friendly personal relationship with Putin, while his administration still imposed sanctions and other punitive measures.

Another, more immediate area of disagreement in Reykjavik, the site of the famous 1986 summit between President Ronald Reagan and Russian leader Mikhail Gorbachev, is the Arctic, where Russia has been expanding its military presence and pursuing policies to expand its influence, to the alarm of the Americans.

Blinken noted that the U.S. and Russia have cooperated in the past on Arctic issues, although he glossed over deep American opposition to Russia’s increased military activity in the area and its proposal to renew a long-suspended military dialogue within the eight-nation Arctic Council.

Blinken rejected Russian calls to resume a military component of the Arctic Council and expressed concerns about Russia’s increasing military activity in the region known as the “high North.” On Wednesday, in successive meetings with foreign ministers from other Nordic Council members, Blinken repeatedly referred to the importance of “continuing to maintain this region as one of peaceful cooperation.”

“We have concerns about some of the recent military activities in the Arctic,” he said. “That Increases the dangers of accidents and miscalculations and undermines the shared goal of a peaceful and sustainable future for the region.”

Blinken also took Russia to task for proposing new navigational regulations for the region and decried Lavrov for comments in which he dismissed such criticism because the Arctic “is our territory, our land.”

In his comments Monday, Lavrov noted the grievances about Russia’s military activities in the Arctic. “It has long been common knowledge that this is our territory, our land. We are in charge of keeping the Arctic coast safe. Everything Russia is doing there is absolutely legal,” he said.

Moscow and Washington are also embroiled in a bitter dispute over the status of their respective embassies and consulates after the diplomatic expulsions. Russia has given the U.S. until Aug. 1 to get rid of all non-American staff at its diplomatic missions, something the U.S. says will make it nearly impossible for its facilities to function. 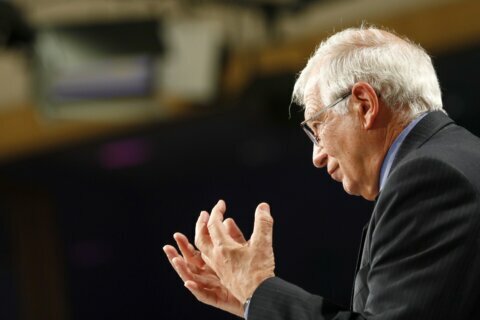