Spain returns 6,600 to Morocco, families look for loved ones

CEUTA, Spain (AP) — Officials in Ceuta, a Spanish enclave in North Africa, faced complications Friday in reuniting worried Moroccan parents with hundreds of children and teenagers swept up in a diplomatic standoff between Madrid and Rabat over migration and the disputed territory of Western Sahara.

So far, authorities have confirmed 438 unaccompanied minors were among more than 8,000 people who arrived in Ceuta from Morocco between Monday and Wednesday by scaling a border fence or swimming around it. Social service workers were checking the ages of many more young people who are in shelters or roaming the streets, Mabel Deu, a spokesperson for the autonomous city, said.

A hotline set up Thursday had received 4,400 calls by a day later from desperate relatives seeking information, she said. Many of the inquiries were about minors.

“Our goal is that they reunite with their parents as soon as possible because we understand the anguish and worry of many families who don’t know where their children are,” Deu said.

Morocco has already taken back over 6,600 of the migrants who made it to Ceuta, Spanish authorities said. Entering the city put them in European Union territory. Hundreds of thousands of asylum-seekers attempt to reach Europe from Africa each year.

Many of the anxious relatives calling the hotline are just a few miles across the border, in the Moroccan city of Fnideq. But stepped-up vigilance along an 8-kilometer-long (5-mile-long) border and the overwhelmed resources on the Spanish side making the reunions difficult.

Fatima Zohra told The Associated Press that other girls pushed her 14-year-old daughter to cross the border without her mother’s knowledge. Zohra said she spotted her daughter in photos from inside the warehouse where Spanish officials are keeping the minors while they process them.

“Please help me find my daughter,” she said. “We always provided for her. We have money. Her father works in a private company.”

Spain is legally obliged to care for young migrants until their relatives can be located or until they turn 18. Authorities are deciding where in the Spanish mainland to distribute 260 of the minors already in Ceuta before the latest surge.

But reunions are also proving difficult to bring about, Deu said. Some children told social services they really want to stay, even against their parents’ wishes. Others can’t get home soon enough.

“I want to leave this place. I don’t want Ceuta. I want Morocco,” AP reporters heard a girl crying at a one center

Save The Children, an international non-profit, said speeding up the return of the minors should be done on a case-by-case basis, upholding the child’s safety and interests above everything else.

The humanitarian crisis started as Morocco and Spain were at odds over Spain agreeing to provide COVID-19 care to a prominent Sahrawi leader fighting for the independence of Western Sahara, a territory once under Spanish control that Morocco annexed in the 1970s.

While blaming Spain for creating a diplomatic dispute by hospitalizing the leader of the Polisario Front, Moroccan authorities have denied that they encouraged this week’s mass migrant crossings to Ceuta.

Witnesses and reporters, including AP’s, have described seeing the border guard relax controls. But at least two Moroccan officials have separately attributed the massive surge to favorable weather or troops being tired following Ramadan celebrations.

“This was not improvised, it was planned. Morocco benefits by sending us and clearing people out,” an 18-year-old who crossed this week into Ceuta told AP. “We are Morocco’s experiment. We are like lab rats.”

The young man asked for his name not to be disclosed for fear of deportation and other reprisals.

Morocco’s central police directorate called allegations that public agencies and officers encouraged the crossings “false.” In response to AP’s questions, the directorate said statements from minors not under the watch of parents or guardians “cannot be relied upon or based on.”

Adult migrants remaining in Ceuta were scattered between makeshift shelters and a migrant holding facility where some asylum-seekers were taken. Many, especially Moroccans, were also roaming the streets, hiding from police patrols rounding up migrants.

No more migrants arrived in the city without authorization for the third day in a row after Moroccan authorities stepped up vigilance. However, security forces on both sides of the fence separating Morocco from Melilla — another Spanish territory in North Africa — repelled groups of youths trying to reach Spanish soil. The government said at least 70 of them made it in throughout the day.

Sovereignty claims over Ceuta and Melilla by Morocco have been an intermittent flashpoint between the two Mediterranean neighbors.

But relations dipped to a low this month over Spain’s decision to host Brahim Ghali, who leads the Sahrawi’s fight against Morocco’s annexation of Western Sahara. Ghali, who arrived under a different name with an Algerian passport, is recovering in a hospital from COVID-19.

Morocco’s ambassador to Spain, Karima Benyaich, on Friday warned that the crisis could worsen depending on how Spain deals with Ghali.

“To choose the same procedure for his departure is to choose the stagnation and the worsening of the crisis,” Benyaich told Spain’s public broadcaster TVE.

“The conviction by Moroccan diplomats that Trump’s declaration could create a global dynamic to legitimize the annexation and illegal occupation of Western Sahara by Morocco resulted in a political fiasco,” the group said.

Morocco has offered to grant wide-ranging autonomy to the territory, where a U.N. peacekeeping force has monitored a cease-fire since 1991. The Polisario Front says local people have the right to a referendum on self-determination.

Aritz Parra in Madrid, Tarek Ananou in Ceuta, Spain, and Tarik El Barakah in Rabat contributed to this report. 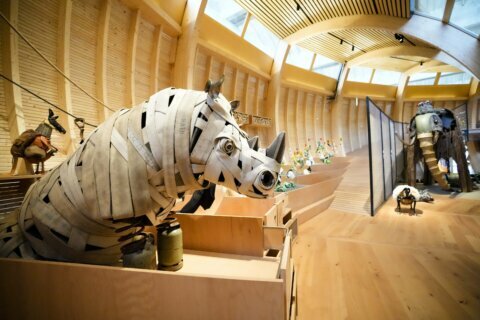