ROME (AP) — A defense lawyer for a young American on trial for the slaying of an Italian police officer contended in court on Friday that deep-set psychiatric problems, including his client’s constant fear of attack, figured in the fatal stabbing on a Rome street in July 2019.

The trial of Finnegan Lee Elder, now 21, and co-defendant Gabriel Natale-Hjorth, now 20, who had rendezvoused in Rome during separate European summer vacations, is nearing its conclusion, 14 months after it began. The young men, who were friends from the San Francisco Bay Area, are charged with attempted extortion, the slaying of a plainclothes Carabinieri officer, Mario Cerciello Rega, and assault on Cerciello Rega’s police partner.

The prosecution last month asked the jury to convict the two and sentence them to Italy’s harshest criminal punishment — life imprisonment.

Both defendants cite self-defense, contending they mistook the officers for criminals attacking them on a dark street near their hotel. The Americans have told the court they believed they were going to meet the go-between at an encounter that Natale-Hjorth had arranged after a botched deal to buy some cocaine a few hours earlier in a Rome nightlife district.

The Carabinieri officers had been assigned to respond to what prosecutors allege was a small-scale extortion attempt after the American had paid for cocaine they didn’t receive. In reprisal, the Americans snatched the go-between’s knapsack with his phone inside, headed back to their hotel and set up a meeting in hopes of exchanging it for the 80 euros ($96) they lost in the failed cocaine transaction.

In trial testimony, defense witnesses have described Elder has having suffered for years from various psychiatric problems.

Elder was afflicted by “constant fear of being attacked,” one of his lawyers, Renato Borzone, told the court during closing arguments. What’s more, the defendant saw a world full of enemies due to his psychiatric problems, the lawyer contended.

Borzone said something “short-circuited” when Elder was confronted by Cerciello Rega. Elder has contended that the officer immediately attacked him, throwing his weight on top of the defendant. Elder has told prosecutors he feared he was being strangled, so he pulled out a knife he brought with him to the appointment and stabbed Cerciello Rega to make the officer get off of him.

In “those 10 to 15 seconds” of the stabbing, “those 11 thrusts of the knife (took place) inside this psychiatric context” — that is, Elder’s fear of being attacked, Borzone argued.

.Varriale has testified that he and his partner identified themselves to the Americans as police officers. But Elder has insisted that Cerciello Rega and Varriale never displayed badges or otherwise identified himself.

Borzone sought to sow doubts on Varriale’s credibility, contending that the officer repeatedly contracted himself or lied about the night’s events, including in statements early in the investigation to the Carabinieri paramilitary corps which was probing the slaying of one of its own.

A verdict could come by early May. 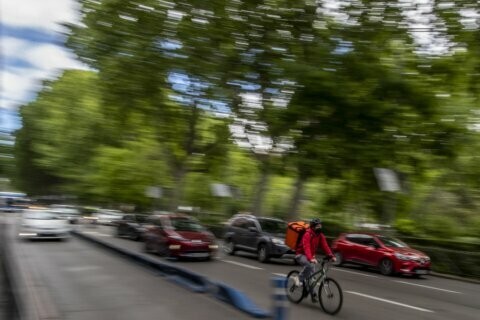