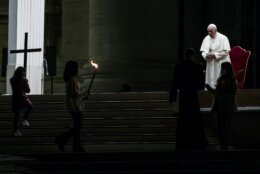 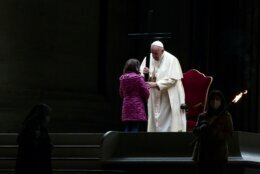 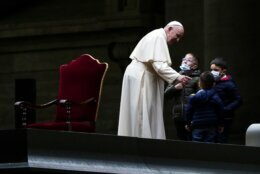 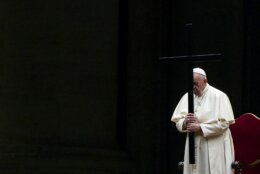 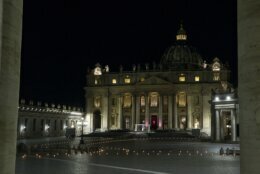 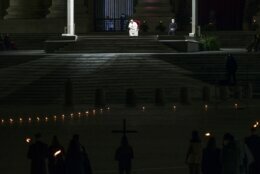 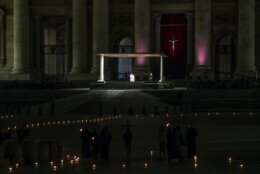 VATICAN CITY (AP) — Pope Francis prayed that people don’t feel lost amid the problems of the pandemic as he listened to children’s poignant accounts of sorrow and loneliness, which provided the motif for an unusual Way of the Cross torch-lit Good Friday procession in St. Peter’s Square.

Sitting under a canopy erected over a platform outside St. Peter’s Basilica on a warm evening, Francis presided over the procession, which, for a second year due to pandemic concerns, couldn’t be held at its traditional venue, Rome’s Colosseum. The appointment at the ancient arena normally draws thousands of pilgrims, tourists and Romans. But pandemic safety measures have seen tourism practically vanish from Italy.

Instead, candles were placed in a circle around the square’s central obelisk. The flames, moving in a breeze, cast golden reflections on the dark gray cobblestones of the square. A nun helped a young boy carry a tall, lightweight slender cross at the start of the procession.

Children’s reflections of regret or other emotional moments of their life were read aloud, alternately, by a boy and a girl, as the pope listened.

One child wrote plaintively of loneliness in the COVID-19 pandemic, from not being able to visit her grandparents to keep them safe from contagion and from missing volleyball teammates, school chums and teachers since schools in Italy have been closed for long stretches due to lockdown.

“The sadness of loneliness at times becomes unbearable,” the girl wrote.

After that child’s account was read, Francis rose and prayed that the Lord would “enlighten us in this dark night, so we don’t lose our way in this difficult period.”

The individual authors of the meditations were not identified by the Vatican. But they were penned by scouts from Umbria and children from a Roman Catholic parish in Rome, the Vatican said.

Also read was a child’s account of losing a grandparent. “From the ambulance, men got out who looked like astronauts, covered in protective gowns, gloves, masks and visors. They took away Grandpa, who for some days was struggling to breathe. It was the last time I saw Grandpa,” the child wrote, adding that “I imagine (him) suffering also due to loneliness.”

At another point in the ceremony, Francis prayed that God would give people his hope so “we will be able to recognize you even in the darkest moments of our life.”

The ceremony, which recalls Jesus’ suffering in the hours before his crucifix and death on a cross, ended with the pope’s blessing. Then a small boy wandered onto the platform where Francis was standing, and the pope leaned over to greet him. A few more children scampered up onto the platform to give Francis hugs.

At ceremony’s completion, the pope was limping badly as he made his way toward the basilica. Francis has been suffering from a bad bout of sciatica, a nerve inflammation that causes back or leg pain. 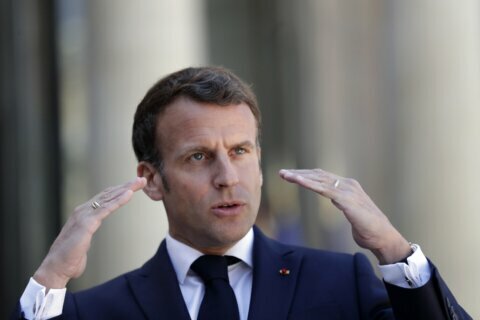