ROME (AP) — An Italian jury will next week begin deliberating the fate of two young American men on trial for the slaying of a Carabinieri police officer while they were vacationing in Rome in 2019.

Judge Marina Finiti said on Monday that the case will go to the jury on May 5, after defense rebuttals conclude earlier that day. Vice Brigadier Mario Cerciello Rega, 35, died after being stabbed 11 times on a street near the tourists’ hotel. Finnegan Lee Elder, now 21, and Gabriel Natale-Hjorth, now 20, have insisted they thought that Cerciello Rega and his plainclothes partner were criminals out to attack them.

Prosecutors alleged that Elder repeatedly stabbed Cerciello Rega with a 7-inch (18-centimeter) knife that he brought with him from California on his vacation to Europe.

Elder, then 19, had met up with Natale-Hjorth, then 18, a former schoolmate, in Rome. The two attempted to buy cocaine in Trastevere, a nightlife district in the Italian capital, but after paying 80 euros ($95) for the drug, they didn’t receive it. In reprisal, the two took a knapsack belonging to the go-between in the botched deal and headed back to their hotel.

In what prosecutors depicted as a small-scale extortion attempt, Natale-Hjorth set up a meeting with the go-between, whose phone was in the bag. The defendants, prosecutors alleged, demanded their money back in exchange for returning the phone and bag.

The go-between told police his bag was stolen. Cerciello Rega and Andrea Varriale, both in casual summer dress instead of in uniform and without their service pistols, showed up instead for what was supposed to be the appointment with the go-between.

Prosecutor Maria Sabina Calabretta in her rebuttal Monday dismissed defense arguments that Elder’s constant fear of attack, part of a history of psychiatric issues, led him to stab Cerciello Rega after the officers appeared on a dark street where the defendants were expecting the go-between.

Rejecting depictions that she was seeking life imprisonment for both defendants, as some kind of “trophy,” Calabretta told the court in her rebuttal on Monday: ”There is no trophy for anyone here. You don’t win or lose, beyond what was already lost — the life of a man.”

A defense attorney for Natale-Hjorth, who testified that Varriale stopped scuffling with him to go to the aid of his stricken partner, sought to distance his client from Elder. The prosecution has depicted the defendants as being in cahoots in the alleged murder as well as in the alleged extortion bid.

“My client is extraneous to everything that has to do with homicide,” Fabio Alonzi told the court. 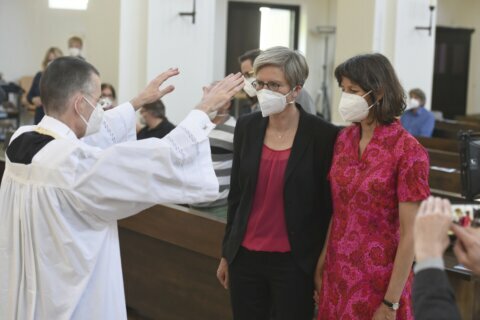