Dutch police arrest 2 after attack on photojournalist in car

THE HAGUE, Netherlands (AP) — Dutch police arrested two people after a tractor pushed a photojournalist’s car — with the photographer and his girlfriend seated inside — onto its roof and into a roadside ditch.

The attack — captured in dashcam footage — happened late Monday night as photographers shot pictures of a car fire in the central Dutch town of Lunteren, about 70 kilometers (around 45 miles) southeast of Amsterdam.

Police said in a statement Tuesday that they arrested the driver of the tractor and another man suspected of threatening and attacking photographers.

“Journalists must be able to do their work in safety,” said Naomi Hoekstra, the police chief for the central Gelderland region. “This crosses all boundaries. We will not accept this. Our officers took appropriate action. The investigation is in full swing.”

Dashcam footage showed men beating the photographer’s car with yellow objects before one of them drives a tractor into the car and flips it onto its roof and into the ditch.

Firefighters who were already tackling the car fire extracted the photographer and his girlfriend from the car. The couple were checked over by paramedics and didn’t require hospital treatment, police said.

Thomas Bruning, general secretary of the Netherlands Association of Journalists, condemned the attack.

“I hope that these kind of scary images will bring about a turning point in the aggressive treatment of journalists,” he said in a tweet. 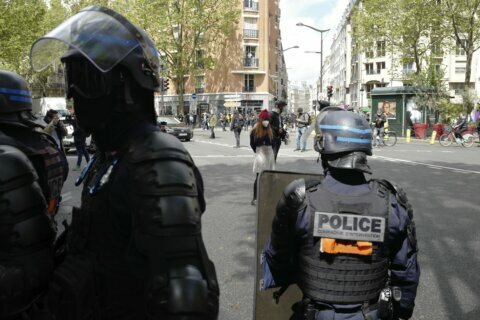