BUCHAREST (AP) — Hundreds of police protested Thursday in the Romanian capital of Bucharest over cutbacks and poor working conditions.

They converged in front of the Ministry of Internal Affairs building where they honked horns, blew whistles and let off smoke bombs in the colors of the Romanian flag — blue, yellow and red — to express anger over a two-year salary freeze, pension cuts and unacceptable working conditions.

“There are approximately 3,000 police stations that have toilets outside the building, in the back yard — they have no running water,” Cosmin Andreica, president of the Europol police trade union, told The Associated Press.

The cutbacks are part of wider budgetary cuts under the coalition government led by Prime Minister Florin Citu of the National Liberal Party that came to power in December. Romania, one of the European Union’s poorer members, has 19.3 million people.

A few days ago, the Europol union posted a photograph online that showed a pile of plaster debris that had fallen from a police station ceiling in the northern town of Botosani.

“The ceiling of the building collapsed over documents and work equipment, endangering the lives of our colleagues,” the group wrote.

The demonstrations, organized by two separate police unions, were held on Romanian Police Day, which this year marked 199 years since its formation.

“We protest with chains on our feet because we feel tied by our hands and feet, and because we can’t offer Romanian citizens a good police service,” Canarau said.

Romania’s interior minister did not respond to requests for comment on the police union claims. 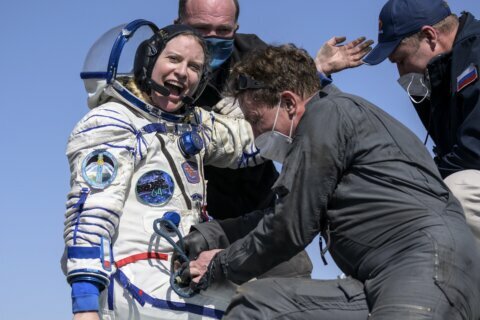