NICOSIA, Cyprus (AP) — The Orthodox Church of Cyprus on Tuesday called for the withdrawal of the country’s controversial entry into this year’s Eurovision song contest titled “El Diablo,” charging that the song makes an international mockery of country’s moral foundations by advocating “our surrender to the devil and promoting his worship.”

The Holy Synod, the Church’s highest decision-making body, said in a statement that the song “essentially praises the fatalistic submission of humans to the devil’s authority” and urged the state broadcaster to replace it with one that “expresses our history, culture, traditions and our claims.”

With the Church now having officially weighed in, the controversy has taken on a new dimension after the song and its lyrics — “I gave my heart to el diablo … because he tells me I’m his angel” — caused a stir among some in the east Mediterranean island nation, who consider it to be fraught with Satanic connotations.

The Church’s official stance came a few days after a man was charged with uttering threats and causing a disturbance when he barged onto the grounds of the public broadcaster to protest what he condemned as a “blasphemous” song that was an affront to Christianity.

Police said witnesses to Saturday’s incident told investigators the man verbally accosted employees outside the Cyprus Broadcasting Corporation’s news department. Amateur video of the man confronting CyBC staff showed him screaming at a number of employees in the yard, asking how they could justify supporting such a song.

Vocal critics included a senior cleric, an organization representing theologians who teach in high schools, a far-right party and many ordinary Cypriots who took to social media to heap scorn and “disgust” at the song. However, many others defended the tune in social media posts as a simple ditty about a “scorching love affair” gone bad or to label its detractors as religious zealots.

CyBC Board Chairman Andreas Frangos insisted that the song won’t be withdrawn and that it wasn’t the broadcaster’s intention to insult anyone’s religious sentiments.

Speaking on the broadcaster’s midday news show, Frangos conceded that the broadcaster should’ve done a better job explaining the core message of the tune, which describes an abusive relationship between two lovers.

But the Cyprus Church rejected the broadcaster’s “metaphorical interpretation” of the tune, which it said “in no way reflects the lyrics’ provocative and unacceptable content which doesn’t cease to represent a terrible subculture that is completely at odds with our people’s values and goes against their Greek and Orthodox traditions.”

The Church said it has received a “deluge of reactions from thousands” of people who express their “justified disappointment” over the song, including many “respected musicians.”

“From whatever angle you chose to look it and whichever explanations are given about the lyrics of the song, they don’t send the most ideal messages which must be sent from a semi-occupied homeland that struggles for freedom and to prevent its complete subjugation,” the Holy Synod’s statement said.

Cyprus has been divided along ethnic lines since 1974 when Turkey invaded following a coup by supporters of union with Greece. For centuries, the Church had been considered as the guardian of Greek Cypriots’ faith and ethnic identity.

Cyprus’ best-ever showing in the popular music competition was as runner-up in 2018 with the song “El Fuego” by singer Eleni Foureira.

The annual Eurovision contest is a beloved European institution watched by millions that often involves songs that are controversial, in questionable taste or just plain bad. 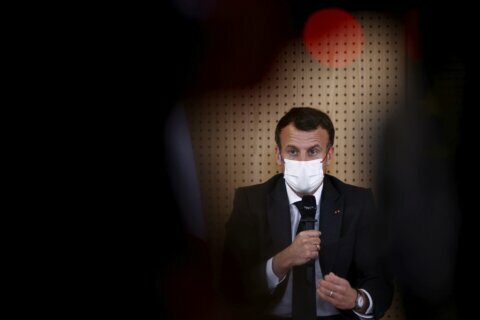