Not to be sniffed at: Agony of post-COVID-19 loss of smell

A year into the coronavirus pandemic, doctors are striving to better understand and treat patients who lose their sense of smell. Called anosmia, the condition is a common symptom of COVID-19. It is non-lethal but terribly vexing for the small minority of long-term sufferers who many weeks after infection still cannot taste food or smell the things they love
Listen now to WTOP News WTOP.com | Alexa | Google Home | WTOP App | 103.5 FM
(1/9) 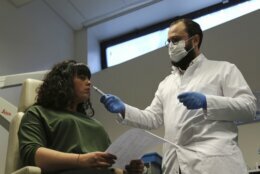 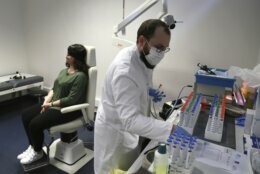 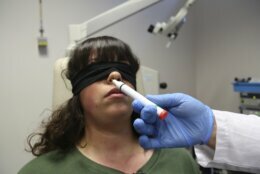 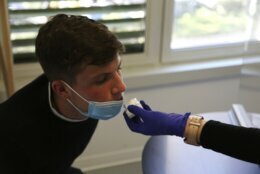 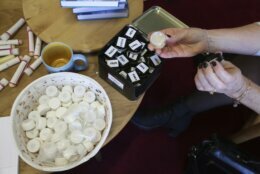 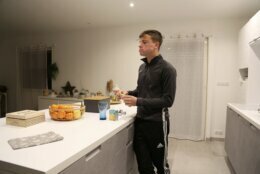 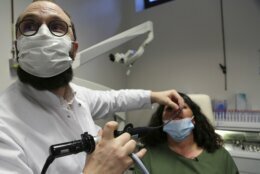 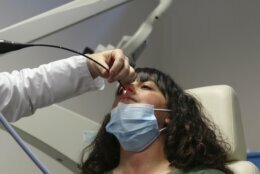 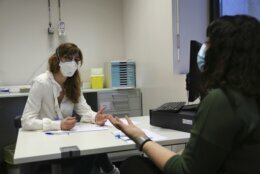 “Tickles a bit, eh?” he asked as he rummaged around her nasal passages, the discomfort causing tears to well in her eyes and roll down her cheeks.

The patient, Gabriella Forgione, wasn’t complaining. The 25-year-old pharmacy worker was happy to be prodded and poked at the hospital in Nice, in southern France, to advance her increasingly pressing quest to recover her sense of smell. Along with her sense of taste, it suddenly vanished when she fell ill with COVID-19 in November, and neither has returned.

Being deprived of the pleasures of food and the scents of things that she loves are proving tough on her body and mind. Shorn of odors both good and bad, Forgione is losing weight and self-confidence.

“Sometimes I ask myself, ’Do I stink?'” she confessed. “Normally, I wear perfume and like for things to smell nice. Not being able to smell bothers me greatly.”

A year into the coronavirus pandemic, doctors and researchers are still striving to better understand and treat the accompanying epidemic of COVID-19-related anosmia — loss of smell — draining much of the joy of life from an increasing number of sensorially frustrated longer-term sufferers like Forgione.

Even specialist doctors say there is much about the condition they still don’t know and they are learning as they go along in their diagnoses and treatments. Impairment and alteration of smell have become so common with COVID-19 that some researchers suggest that simple odor tests could be used to track coronavirus infections in countries with few laboratories.

For most people, the olfactory problems are temporary, often improving on their own in weeks. But a small minority are complaining of persistent dysfunction long after other COVID-19 symptoms have disappeared. Some have reported continued total or partial loss of smell six months after infection. The longest, some doctors say, are now approaching a full year.

Researchers working on the vexing disability say they are optimistic that most will eventually recover but fear some will not. Some doctors are concerned that growing numbers of smell-deprived patients, many of them young, could be more prone to depression and other difficulties and weigh on strained health systems.

“They are losing color in their lives,” said Dr. Thomas Hummel, who heads the smell and taste outpatients clinic at University Hospital in Dresden, Germany.

“These people will survive and they’ll be successful in their lives, in their professions,” Hummel added. “But their lives will be much poorer.”

At the Face and Neck University Institute in Nice, Dr. Clair Vandersteen wafted tube after tube of odors under Forgione’s nose after he had rooted around in her nostrils with his camera.

“Do you perceive any smell? Nothing? Zero? OK,” he asked, as she repeatedly and apologetically responded with negatives.

Only the last tube provoked an unequivocal reaction.

“You need an enormous amount of an odor to be able to smell something,” he told her. “You haven’t completely lost your sense of smell but nor is it good.”

He sent her away with homework: six months of olfactory rehab. Twice daily, choose two or three scented things, like a sprig of lavender or jars of fragrances, and smell them for two to three minutes, he ordered.

“If you smell something, great. If not, no problem. Try again, concentrating hard on picturing the lavender, a beautiful purple bloom,” he said. “You have to persevere.”

Losing the sense of smell can be more than a mere inconvenience. Smoke from a spreading fire, a gas leak, or the stink of rotten food can all pass dangerously unnoticed. Fumes from a used diaper, dog’s dirt on a shoe or sweaty armpits can be embarrassingly ignored.

And as poets have long known, scents and emotions are often like lovers entwined.

Evan Cesa used to relish meal times. Now they’re a chore. A fish dinner in September that suddenly seemed flavorless first flagged to the 18-year-old sports student that COVID-19 had attacked his senses. Foodstuffs became mere textures, with only residual hints of sweet and saltiness.

“Eating no longer has any purpose for me,” he said. “It is just a waste of time.”

Cesa is among the anosmia sufferers being studied by researchers in Nice who, before the pandemic, had been using scents in the diagnosis of Alzheimer’s disease. They also used comforting fragrances to treat post-traumatic stress among children after a truck terror attack in Nice in 2016, when a driver plowed through holiday crowds, killing 86 people.

The researchers are now turning their expertise to COVID-19, teaming up with perfumers from the nearby fragrance-producing town of Grasse. Perfumer Aude Galouye worked on the fragrant waxes that were wafted under Cesa’s nose to measure his olfactory impairment, with scents at varying concentrations.

“The sense of smell is a sense that is fundamentally forgotten,” Galouye said. “We don’t realize the effect it has on our lives except, obviously, when we no longer have it.”

The examinations on Cesa and other patients also include language and attention tests. The Nice researchers are exploring whether olfactory complaints are linked to COVID-related cognitive difficulties, including problems with concentrating. Cesa stumbled by picking the word “ship” when “kayak” was the obvious choice on one test.

“That is completely unexpected,” said Magali Payne, a speech therapist on the team at the Côte d’Azur University’s CoBTeK lab. “This young man shouldn’t be experiencing linguistic problems.”

“We have to keep digging,” she said. “We are finding things out as we see patients.”

Cesa longs to have his senses restored, to celebrate the taste of pasta in carbonara sauce, his favorite dish, and a run through the fragrant wonders of the great outdoors.