KYIV, Ukraine (AP) — Winter’s cold and harsh police actions in Belarus have put a chill on the protests against President Alexander Lukashenko that gripped the Eastern European nation for months. But opposition forces are preparing to turn up the heat in the spring and observers say Lukashenko doesn’t have a clear strategy to overcome new unrest.

Here’s a look at the country’s situation six months after the start of an unprecedented wave of protests that attracted world attention.

Protests broke out after the Aug. 9 presidential election, the official results of which gave Lukashenko a sixth term in office. Opposition figures and some poll workers, however, said those results were fraudulent. The nationwide demonstrations, some of which attracted up to 200,000 people, were the largest and most sustained challenge to Lukashenko in his 26 years of repressive rule.

The protests withered away as severe cold set in and Belarusians became wearied by police repressions that were often violent. Some relatively small and scattered protests took place in late January and about 250 people were arrested.

Overall, human rights activists say, more than 30,000 people have been arrested in the monthslong wave of protests, and many of them were beaten. While opposition leaders chose peaceful tactics, police in Belarus intensified their repression and began to use water cannons, gas and rubber bullets to disperse demonstrations.

“The protests ceased to be an existential threat to Lukashenko’s power when it became clear that people were not ready for violent resistance,” said Artem Shraibman, an independent analyst from Minsk.

“Lukashenko opened a new portal to violence — we were shocked and not ready,” said Sviatlana Tsikhanouskaya, Lukashenko’s main challenger on the presidential ballot who fled to Lithuania under pressure just after the election.

At one point, as protesters demanding his resignation massed outside the presidential palace, Lukashenko strode the grounds carrying an automatic rifle. That moment “exposed the tragedy of the situation — he is ready to shoot back, but not to leave,” Tsikhanouskaya told The Associated Press.

Barbed wire, water cannons, thousands of soldiers on the streets, and internet shutdowns have become common in Minsk over the past six months. Thousands of Belarusians were forced to flee the country.

But harsh actions by security forces have only temporarily muted the protests, Shraibman said.

“Lukashenko does not have a clear vision of a future strategy. He doesn’t know what to do with the majority of the urban population who have turned their backs on him,” he said.

In return, Lukashenko promised to reform the constitution and transfer a significant part of his powers to parliament and the government, and then leave. But these plans have been confused and contradictory.

At first, he said powers would be transferred to an All-Belarusian Assembly that is to convene in February. Then he disavowed these promises and announced amending the constitution by the end of 2021 and a new referendum. After the adoption of the new constitution, Lukashenko promised to hold a new presidential election.

“All statements are zigzag — the more he makes statements about the constitution, about the future state structure, the more we understand that there is no clear picture and he is just dragging his feet,” said Shraibman.

During the period of mass protests, Lukashenko talked about “the decline of the presidential life” and possible resignation, but then he stopped such statements.

“Lukashenko is letting go of the so-called constitutional reform, which was mostly talked about by Russian leaders, since the protests have been suppressed and there is no longer any need for it,” Shraibman said.

RUSSIA IN SEARCH OF AN ALTERNATIVE

Belarus and Russia are closely but awkwardly linked.

Moscow has supplied Minsk with cheap loans, oil and gas, keeping the unreformed Soviet-style economy of Belarus afloat. However, constant disputes over oil and gas prices have often led to public scandals and accusations by Lukashenko that Russia wants to absorb and incorporate Belarus. The Kremlin is uneasy with Lukashenko’s volatility.

“Loud accusations and the scandalous character of Lukashenko are forcing the Kremlin to look for a replacement,” said Alexander Klaskovsky, an independent analyst. “But Putin cannot refuse to support Lukashenko without having a clear alternative and a clear scenario of his own.”

Lukashenko also has pressured Russia into cooperation by portraying Belarus as a testing ground for future uprisings in Russia.

“Now his tail is wagging the dog,” Klaskovsky said. “No matter how disagreeable Lukashenko may be to Putin, they will have to endure each other.”

The EU has already introduced three packages of sanctions against seven Belarusian companies and 84 individuals, including Lukashenko.

“The sanctions create a lot of headaches, but they do not change the regime, they are rather symbolic,” Shraibman said.

In December, the United States adopted the Belarus Democracy, Human Rights and Sovereignty Act, which provides for sanctions not only against Belarusians, but also against Russian officials, companies and individuals for supporting Lukashenko’s regime.

“The United States is using the mechanism of raising the price of Lukashenko for Putin, so that Minsk becomes an increasingly toxic and expensive partner for the Kremlin,” Shraibman said.

Peaceful protest and attempts to organize a nationwide strike failed. Officials and security personnel did not go over to the side of the opposition. Harsh repression and the imprisonment of opposition leaders has allowed authorities to take control of the situation.

But the opposition believes that Lukashenko has lost the support of the majority of Belarusians, and that this will eventually lead to changes within the country.

“Every day our resources are increasing, and the resources of the regime are dwindling. Every day he has less money, fewer people, fewer supporters inside and abroad, worse and worse reputation and, accordingly, fewer opportunities,” said Tsikhanouskaya.

The opposition aims to resume its mass actions on March 25, the anniversary of the 1918 declaration of a short-lived independent Belarus. The day traditionally has seen large opposition demonstrations.

“We’re in the mood for long-term play,” Tsikhanouskaya said. 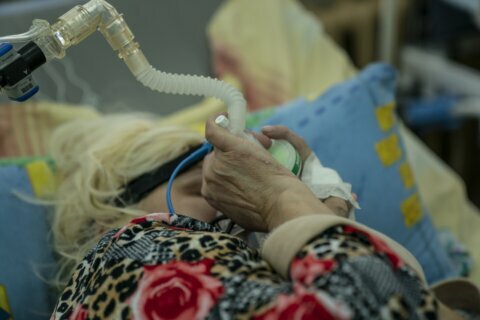