BUDAPEST, Hungary (AP) — The owners of a family-run cafe in a leafy district of Hungary’s capital had planned to engage in a bold act of civil disobedience on Monday, but reconsidered after the government there issued a decree that would throw the already struggling business into bankruptcy.

Before the arrival of the coronavirus pandemic, the Kucko Coffeehouse in Budapest served fine coffees from its designer Italian espresso machine and a cozy atmosphere offering pastries, sandwiches, ice cream, and breakfasts to mostly local residents.

Like many small businesses, it struggled to stay afloat as Hungary’s pandemic restrictions limited bars and restaurants to takeout, and was forced to dismiss all but one of its six employees.

But as bankruptcy threatened, the owners, married couple Olga Miskolci and Attila Blaho, decided not to take it sitting down: On Monday, the couple planned to join as many as 200 other businesses across Hungary in opening their doors to dine-in guests in defiance of pandemic rules.

But a government decree issued on Saturday stiffened penalties for restaurants breaking the restrictions, which Blaho said represented “a clear threat” on the part of the government, which his business couldn’t afford to confront.

“We would have been very happy to line up (for opening) if we were just risking a plain fine,” Blaho said. “We need to give voice to the idea that we will not tolerate this anymore.

“But now it’s not just a fine — it’s about taking our business away from us for six months or even a year. This is a very difficult fight, and a one-sided show of strength.”

Police may now require businesses breaking pandemic rules to close their doors for six months to a year and can issue hefty fines of between $4,000 and $17,000, penalties that dissuaded other businesses as well from following through on their plans to reopen.

On Sunday, the couple attended a Budapest demonstration of around 200 hospitality entrepreneurs and workers demanding a rethinking of Hungary’s pandemic restrictions, the first public manifestation of a growing movement putting pressure on the government to act in defense of the sector, which shrunk by $1.4 billion last year.

The demonstration was dispersed by police, and its two organizers say they were fined $1,700 each for breaking a ban on public gatherings.

Hungary’s pandemic lockdown, which began on Nov. 11, is nearing its three-month mark, and last week was extended to March 1, requiring the hard-hit hospitality sector to hold out yet another month with little government aid.

Of the $68 million set aside by the government for wage assistance to restaurateurs, scarcely more than a quarter has been delivered to date, and many businesses say they’ve received no help at all.

“We applied for state aid last autumn, but no help has come yet, and it would be so little that unfortunately it wouldn’t be any help,” Miskolci said, adding that she doesn’t know anyone that has received cash assistance.

While Hungary’s government has promised to speed up delivery of assistance, business owners like Miskolci and Blaho have had to reach into their own pockets to keep from closing permanently. They’re earning around 10% of what they would need to break even, and have spent around $17,000 of their savings since the start of the pandemic, they said.

“The bills keep coming … and since there isn’t enough revenue, we’re forced to finance (the business) from our own pocket, and we can’t anymore,” Miskolci said.

Opposition politicians and some health experts have urged a reevaluation of pandemic restrictions in the interests of saving service workers and providing some relief to Hungarians struggling under the psychological weight of a long lockdown.

Blaho said capacity restrictions, social distancing and mandatory mask wearing would allow for patrons to visit his business safely, and prevent business owners from having to choose between breaking the law and going out of business.

“We don’t want to break any rules, we’re not inciting people to break the law, but we’re raising our voices together to ask for help,” he said.

“If we don’t get help, then they should let businesses operate in such a way that they can make a profit before they go bankrupt. There’s no other answer.” 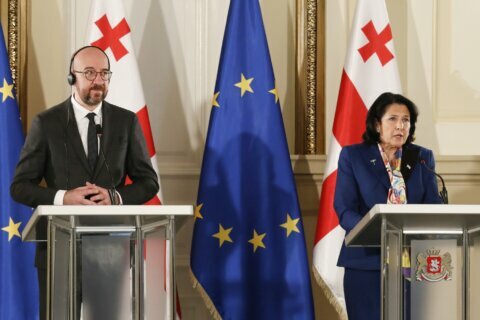