NICOSIA, Cyprus (AP) — Cyprus police used a water cannon and stun grenades to disperse several hundred demonstrators who gathered in downtown Nicosia on Saturday to protest what they said was rampant corruption among the east Mediterranean island nation’s governing elites.

Police said 10 demonstrators were taken into custody, and six others were fined 300 euros ($363) for violating a ban on public gatherings that is part of measures to prevent a possible flare-up of COVID-19 infections.

Police spokesman Christos Andreou said police used force only after demonstrators ignored warnings to disperse and started pelting officers with rocks and other objects from all directions.

Demonstrator Alexandra Attalides accused police of using disproportionate force against the protesters denouncing corrupt politicians and other power brokers who profit on the backs of ordinary citizens.

Attalides said she saw at least one protester suffer a minor head wound and observed one riot officer firing pepper spray into the crowd.

She said demonstrators suspect police officers are overstepping their authority and taking advantage of anti-coronavirus restrictions to silence any opposition to corrupt rule.

Andreou said police had warned protest organizers they would be breaking the law if they went ahead with the event. She said officers act strictly within the law. 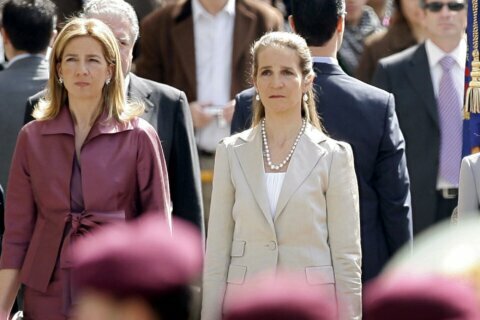