BRUSSELS (AP) — Amid a dispute over expected shortfalls, the European Union is looking at legal ways to guarantee the delivery of all the COVID-19 vaccine doses it bought from AstraZeneca and other drugmakers as regulators are set to consider approving the Anglo-Swedish company’s vaccine for use in the 27-nation EU.

The European Medicines Agency is expected on Friday to authorize use of the vaccine AstraZeneca developed with Oxford University. It would be the third cleared for use in the EU, after the BioNTech-Pfizer and Moderna vaccines.

However, officials in Brussels have quarreled with AstraZeneca after the pharmaceutical company said it would deliver smaller than expected supplies to EU member nations. The bloc’s executive commission asked Belgian authorities to inspect a factory in Belgium that is part of AstraZeneca’s vaccine production chain.

Adding to the uncertainty, a draft recommendation from a German expert committee called for offering the Oxford-AstraZeneca vaccine only to people under age 65 for now.

European authorities are under pressure after a sluggish start to the EU’s vaccination campaign in its first month, and the AstraZeneca serum would add much-needed extra supplies.

In a reply to a letter he received from four European government leaders, EU Council President Charles Michel said the EU “should explore all options and make use of all legal means and enforcement measures at our disposal,” if negotiations with drug companies don’t yield satisfaction.

The EU is at odds with AstraZeneca over expected delays in deliveries. AstraZeneca said last week that it planned to cut initial deliveries in the EU from the scheduled 80 million doses for the first quarter of the year to 31 million doses. The company cited reduced yields from its manufacturing plants in Europe, but the EU suspects doses produced in Europe have been directed elsewhere.

Michel said the EU could invoke an article of one of its treaties that allows members to take measures “if severe difficulties arise in the supply of certain product.”

Michel wrote that the use of Article 122 “would give the EU and member states the legal means, by adopting appropriate urgent measures, to ensure effective vaccine production and supply for our population. I believe this solution would demonstrate the EU’s strength and reliability in protecting its citizens’ health over and above all other considerations.”

The European Commission also plans to new rules strengthening the control of vaccine exports to ensure the doses it bought are delivered to the bloc’s residents.

In Germany, the draft recommendation added a question mark over how widely it might be used — though the country’s health minister stressed that a final decision won’t be made until after Friday’s EMA meeting.

Germany’s vaccination advisory committee, an independent panel advising the government, called for using AstraZeneca’s vaccine for the 18-64 age group on the basis of currently available information. It said that “there currently is not sufficient data to assess the vaccination effectiveness from 65 years.”

AstraZeneca said after Thursday’s release of the German draft that “the latest analyses of clinical trial data for the AstraZeneca/Oxford COVID-19 vaccine support efficacy in the over 65 years age group.” It added that it awaits EMA’s decision.

The company noted earlier this week that British regulators supported its use in the older age group despite lack of late-stage effectiveness data. It pointed to earlier-stage data published in the journal Lancet in November “demonstrating that older adults showed strong immune responses to the vaccine, with 100% of older adults generating spike-specific antibodies after the second dose.”

But questions have remained about how well the vaccine protects older people. Only 12% of participants in the AstraZeneca research were over 55 and they were enrolled later, so there hasn’t been enough time to see whether they get sick at a lower rate than those who didn’t get the vaccine.

German Health Minister Jens Spahn said there had been a discussion about a lack of data on the subject since the autumn, but it wasn’t yet clear “how concretely” that would ultimately affect authorities’ decisions.

AstraZeneca said Thursday that the latest analyses of clinical trial data “support efficacy in the over 65 years age group” and it awaits the EMA’s decision.

The EU, which has 450 million people, has signed deals for six different vaccines. In total, it has ordered up to 400 million doses of the AstraZeneca vaccine and sealed deals with other companies for more than 2 billion shots.

The inspection the European Commission requested of production at manufacturer Novasep’s factory in Seneffe, Belgium has been done, and the data collected will be analyzed in the coming days, Belgian authorities said.

The EU said the Belgian factory is one of four AstraZeneca sites included in the contract sealed by the Commission and the company to produce vaccines for the EU market.

Stella Kyriakides, the European Commissioner for health and food safety, said AstraZeneca should provide vaccines from its U.K. facilities if it it is unable to meet commitments from factories in the EU. Kyriakides also made clear the EU would find out if some of the doses manufactured in the EU were diverted elsewhere.

Company CEO Pascal Soriot has argued in an interview with Die Welt newspaper this week that the UK government helped develop the vaccine and signed its contract three months before the EU reached its agreement. He said the contract with British authorities specifies that vaccines produced at UK sites must go to the UK first.

However, the Commission said it remains confident that the AstraZeneca delay will not affect its plans to ensure that at least 80% of EU citizens over age 80 are vaccinated by March. Health policy spokesman Stefan de Keersmaecker said that target is based on the availability of doses manufactured by Pfizer-BioNTech and Moderna.

“It is an ambitious target, but we believe it is a realistic one,” he said.

More than 400,000 EU residents with COVID-19 have died since the beginning of the pandemic.

Moulson reported from Berlin. Danica Kirka in London and Sylvain Plazy in Brussels contributed to this story. 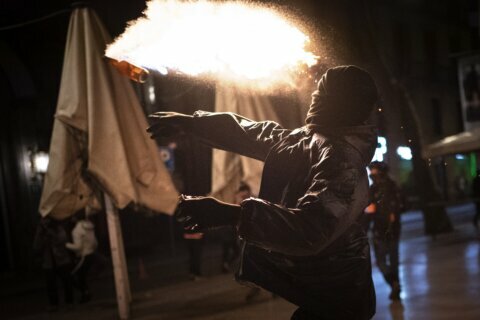