MADRID (AP) — Public outrage is growing in Spain as cases of politicians and well-connected opportunists jumping the queue in the national coronavirus vaccination campaign come to light, even as delivery delays have forced some regions to stop new inoculations.

Spain’s Defense Ministry has been the latest governmental department to launch an internal inquiry to find out if the military top brass dodged coronavirus vaccine protocols by receiving a jab before their turn.

In Spain, top government and other officials have not been granted preferential access to the vaccine — unlike other European countries where they were among the first to get the jab, to encourage members of the public to follow suit.

Nursing home residents and staff, as well as first-line health workers, are currently receiving jabs as priority groups in the national vaccination plan. The rollout is suffering delays due to a shortage of deliveries by Pfizer-BioNTech, currently the main supplier of vaccines. Having administered over 86% of the 1.1 million vaccine doses received, several regions have halted new vaccinations until fresh supplies arrive.

The Health Ministry announced this week that the next group will be those above 80 years old.

Defense Minister Margarita Robles said Friday that the Armed Forces had their own vaccination plan but that she nevertheless had requested a report from Gen. Villarroya, who is 63, to clarify the issue.

The questions follow several cases of queue-jumping by politicians or people with connections that have come to light in recent weeks, drawing widespread criticism and leading to high-profile dismissals.

Prime Minister Pedro Sánchez’s Socialist Party on Friday issued a statement urging any elected official who has skipped the line to resign immediately. Top members of the Popular Party, the conservative leader of the opposition, have made similar remarks.

But whereas the regional health chief of the south-eastern Murcia region, a PP member, appeared on television, tearful, after he lost his job when media revealed that he had received the first vaccine jab, party colleague Javier Guerrero, who has the equivalent position in Ceuta, a Spanish outpost in northern Africa, refused to resign saying that fieldwork often exposed him to contagion.

Guerrero, who is a physician himself and has diabetes, said at a press conference Thursday that he accepted getting the jab because his staff insisted.

“I didn’t want to get vaccinated, but my technical staff told me that unless I did it they wouldn’t do it themselves,” he said. “I really didn’t want to. I don’t even get the flu vaccine. I don’t like vaccines.”

Pressure from the public has so far led to resignations or dismissals of several local mayors and councilors, as well as some hospital directors.

At the San Carlos Clinic Hospital in Madrid, retired health workers and family members were asked to show up for a vaccine so as not to waste soon-to-expire doses.

Experts have highlighted the need to ramp up vaccination to counter the spread of the coronavirus, which has infected 2.5 million and killed over 55,400 people in Spain. The health ministry reported 42,885 new infections and 400 additional confirmed deaths on Friday, as several regions launch new restrictions aimed at curbing the contagion.

One in five hospital beds and over 37% of ICU beds are now devoted to treating coronavirus patients. In six of the country’s 19 regions, half or more of ICU beds are already filled with patients that need ventilation or other acute treatment.

Authorities say that while the number of new cases continues to soar, the daily percentage increases are diminishing, indicating the surge could be leveling out. Some experts have argued that a strict stay-at-home order is needed urgently. 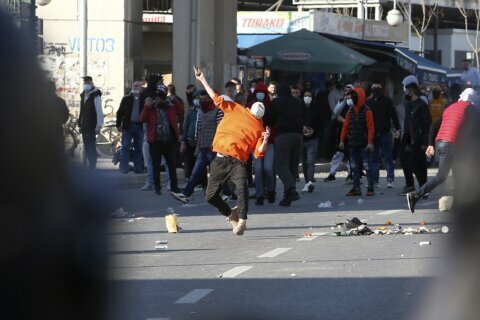