MONTIJO, Portugal (AP) — Local councils in Portugal sent out teams Tuesday to gather votes from people in home quarantine and from residents of elderly care homes before a presidential election being held amid the COVID-19 pandemic.

Authorities have taken exceptional measures to ensure that voting in Sunday’s ballot is possible, even with the country currently in lockdown.

For 48 hours across the country, crews wearing protective clothing and accompanied by a police officer were collecting the votes of people who had registered for the service. The voters are given a ballot paper and privacy to mark their choice.

At an elderly care home in Montijo, a town 30 kilometers (18 miles) east of Lisbon, the visiting team set up a makeshift polling booth for eight voters Tuesday.

Olivia Bibe, an 87-year-old resident of the home, went to the booth in her wheelchair and was thrilled to have her say.

“I was very interested to vote for a person I like very much and that I know will do a lot for everyone,” she said.

Her son-in-law, António Porfírio, said Bibe and her friends at the home were keen to vote.

“These small things matter a lot to them,” he said. “They feel they are not forgotten and it is important while they are confined here in this period to feel that support and participate as usual.”

All votes are kept for days in a locked box until deemed safe to handle and count.

The election is taking place against a backdrop of almost daily records of new COVID-19 cases, deaths and hospitalizations in Portugal. Tuesday’s total of 218 deaths in 24 hours — a fatality every seven minutes — was a new high.

But fewer than 13,000 people — about 15% of those eligible — signed up for the vote-collecting service, officials said, amid complaints from voters that they were given too little notice about the possibility.

Authorities pointed out that residents of care homes were often outside their officially registered voting district, making it impossible for them to cast their ballot where they are living.

On Sunday, 12,000 polling stations will be open, 2,000 more than usual, to help avoid large gatherings of people.

Some 10.8 million people, 1.5 million of them living abroad, are eligible to vote in the ballot, which will elect a head of state for a five-year term. 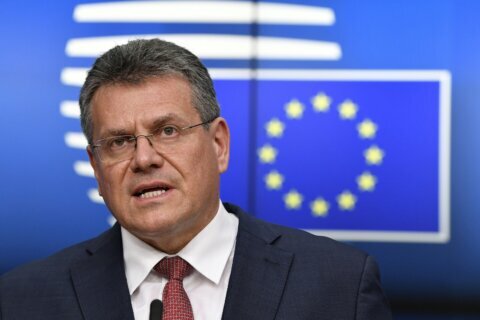