Italian police have recovered a 500-year-old copy of Leonardo da Vinci’s 16th century “Salvator Mundi” painting of Jesus Christ that was stolen from a Naples church during the pandemic without the priests even realizing it was gone.
Listen now to WTOP News WTOP.com | Alexa | Google Home | WTOP App | 103.5 FM
(1/5) 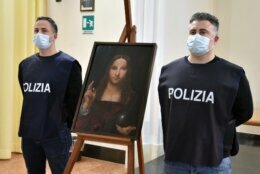 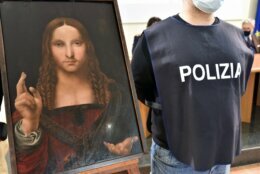 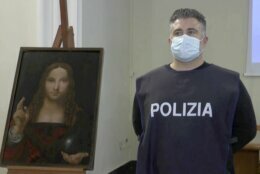 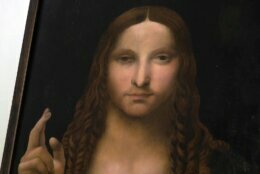 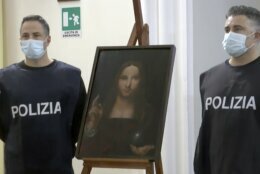 ROME (AP) — Italian police have recovered a 500-year-old copy of Leonardo da Vinci’s 16th century “Salvator Mundi” painting of Jesus Christ that was stolen from a Naples church during the pandemic without the priests even realizing it was gone.

The discovery was made when Naples police working on a bigger operation found the painting hidden in an apartment. Police chief Alfredo Fabbrocini said the apartment owner was detained after he offered a “less than credible” explanation that he had “casually” bought it at a market.

The painting is a copy of the “Salvator Mundi” (Savior of the World) by Leonardo that sold for a record $450 million at a Christie’s auction in 2017. The unnamed bidder was later identified as a Saudi royal who purportedly purchased it on behalf of the Louvre Abu Dhabi. It was supposed to have been unveiled a year later at the museum, but the exhibition was delayed indefinitely and the work hasn’t been seen in public since.

The copy, attributed to the Leonardo school but not the Renaissance artist himself, had been housed in a small museum in a side chapel of the Basilica of San Domenico Maggiore in Naples, which had been closed during the coronavirus pandemic.

Fabbrocini said the discovery was particularly satisfying “because we resolved a case before it was created.” He explained: “The painting was found but its custodian hadn’t realized it was stolen.”

The painting depicts a robed Jesus holding a crystal orb and gazing directly at the viewer. The San Domenico basilica says the painting was probably made by a Leonardo student in the 1520s and purchased by Giovan Antonio Muscettola, an adviser to Emperor Charles V and ambassador to the papal court. It was housed in the basilica’s Muscettola family chapel.

It was restored prior to being exhibited in a 1983-1984 show “Leonardo and Leonardism in Naples and Rome.”