A giant sinkhole opened Friday in the parking lot of a hospital in Naples, Italy, forcing the temporary closure of a nearby residence for recovering COVID-19 patients because utilities were severed.
Listen now to WTOP News WTOP.com | Alexa | Google Home | WTOP App | 103.5 FM
(1/5) 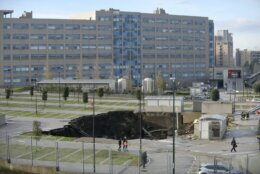 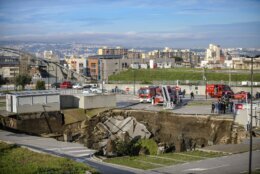 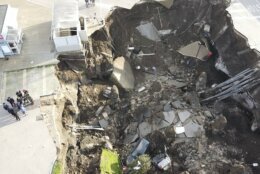 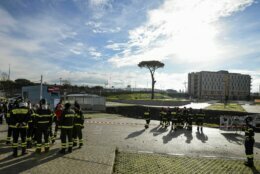 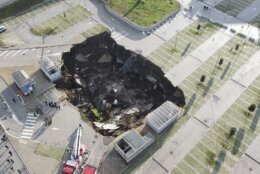 ROME (AP) — A giant sinkhole opened Friday in the parking lot of a hospital in Naples, Italy, forcing the temporary closure of a nearby residence for recovering COVID-19 patients because utilities were severed.

Operations weren’t affected at the Hospital of the Sea, and firefighters said it didn’t appear anyone was injured. The sinkhole consumed three cars in the hospital’s otherwise empty visitors’ parking lot.

The local hospital district said the 20-meter-deep (66 feet), 2,000-square-meter (21,527-square-foot) sinkhole opened at dawn. Chief firefighter Cmdr. Ennio Aquilino told Italian television channel SkyTG 24 the implosion could have been caused by an infiltration of water underground as a result of recent heavy rains.

At the time, six people were recovering at the residence for COVID-19 patients. They have been relocated.

The regional governor, Vincenzo De Luca, said the residence would reopen within days after electricity and water service were restored. Both were also interrupted at the hospital, but backup systems allowed care to continue.

“Frankly, we were also worried about the collapse of all utilities and that the activity of the hospital could be jeopardized,” De Luca said. “Thank God, this did not happen. We had a power break, but electricity was restored and now we don’t have any problem in providing care.” 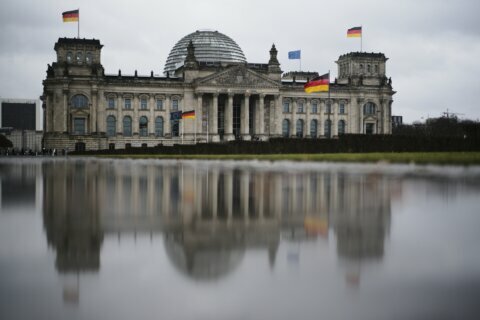