THE HAGUE, Netherlands (AP) — The Dutch government came under heavy criticism from lawmakers Tuesday over a COVID-19 vaccination plan that has the first shots set to be administered on Wednesday, making the Netherlands the last European Union nation to begin vaccinations.

Prime Minister Mark Rutte conceded that his government had focused in its preparations on the easy-to-handle AstraZeneca vaccine, which has not yet been cleared for use in the EU, and not the vaccine produced by U.S. drugmaker Pfizer and Germany’s BioNTech, which is the only shot so far given the green light by the EU’s medicines agency.

“This is outrageous,” Geert Wilders, leader of the largest Dutch opposition party, said during a debate that was arranged during Parliament’s winter recess. “It is not a strategy, but chaos — total chaos — and the preparations were poor and too late.”

Last month, the Netherlands watched from the sidelines as other EU nations began vaccinations on Dec. 27 in what European Commission President Ursula von der Leyen called a “ a touching moment of unity.”

Wilders called the Netherlands “the village idiot of Europe.”

The Netherlands took delivery of thousands of doses of the Pfizer-BioNTech vaccine late last year. But they have remained in freezers in a central storage location while the government finalized its vaccination plans, despite having months to work out how and where to administer the shots.

“What a failure by this Cabinet, that they are still in the freezer!” said Lodewijk Asscher of the Labor Party.

Health Minister Hugo de Jonge said in a letter to lawmakers ahead of the debate that the government had “proved insufficiently agile to accommodate quickly enough the changes that have occurred. Perhaps that could and should have been done differently.”

During the debate, Rutte lamented his government’s lack of agility in adapting its preparations.

“I’m very disappointed that we are two weeks behind other countries,” he said.

De Jonge told lawmakers that, “in a crisis like this, it is unavoidable that mistakes will be made.”

Dutch vaccinations begin Wednesday, with staff at nursing homes, people with handicaps and hospital frontline workers first in line. The government moved the vaccinations forward by two days amid growing anger over its policies and COVID-19-related staff shortages at hospitals.

The Netherlands went into a tough coronavirus lockdown in mid-December, with restrictions that closed all schools, bars, restaurants, theaters and other public places and placed strict limits on gatherings. Infection rates have slowed in recent days, but remain among the highest in Europe.

The confirmed Dutch death toll in the pandemic is more than 11,000, though the actual number is higher because of limited testing.

The country’s public health institute said in its weekly update that the number of confirmed infections declined by 16.2% last week, but it added: “Convincing effects of the lockdown of December 15 have not yet been achieved.”

The Dutch government is not the only body being criticized amid Europe’s vaccination rollout.

The EU’s executive commission has faced criticism for the slowness of the vaccine’s rollout across the region that is home to some 450 million people. The bloc’s drug regulator, the European Medicines Agency, has been criticized for not approving vaccines quickly enough. French authorities also came under fire for inoculating barely 500 people in the first week of its vaccination program.

And even though Germany inoculated over 200,000 people in its first week, its heath authorities are being criticized for not ramping up vaccinations fast enough. 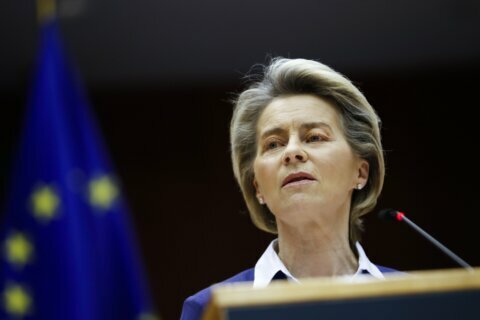