Businesses have spent months worrying about disruption at Britain’s borders when the U.K. makes a post-Brexit economic break from the European Union at the end of the year. Monday’s mayhem, however, was caused by the coronavirus.

Early tracking of a COVID-19 variant that scientists think may spread more easily plunged southern England into lockdown and over the weekend prompted countries around the world to halt flights from the U.K. France went further and shut its border for at least 48 hours from Sunday night, stopping people and cargo vehicles entering by air, road, sea or rail.

The move left the 6,000 trucks that cross from England to France each day on ferries from Dover or on trains through the Eurotunnel stuck, for now, in England.

Port of Dover Chief Executive Doug Bannister said that if the port was not reopened soon, there would be “quite a stark situation.”

“Because of the importance of the Dover straits in handling critical goods such as food and other things like that, I think it could become quite dramatic,” he said.

French Transport Minister Jean-Baptiste Djebbari said a new “health protocol” to be introduced within hours should allow shipments from the U.K. to resume. British officials said they were conferring urgently with their European counterparts.

The delays were an early taste of what many businesses worry will happen on Jan. 1, when Britain leaves the EU’s economic structures, including its vast single market for goods. The break will mean new customs inspections and paperwork — and even worse disruption if the two sides don’t have a new trade agreement in place.

Trade negotiations that began after Britain formally left the EU on Jan. 31 have staggered on for months, with the two sides unable to bridge gaps over fair-competition guarantees and European boats’ access to British fishing waters. With 10 days until the year-end deadline, both sides say it’s likely the talks will fail and there will be a bumpy “no-deal” British exit on Jan. 1.

Earlier this year the U.K. government published its “reasonable worst-case scenario” for post-Brexit border disruption, including lines of 7,000 trucks near Dover and two-day waits to cross the English Channel.

Even if there is a trade deal, new inspections and red tape will bring delays. The government is building huge new truck parking depots and customs clearance sites around southeast England to ease the strain, though most are unfinished or behind schedule.

On Monday, officials shut a stretch of the main highway to Dover, turning it into a parking lot for trucks, and said a disused airport would be reopened to park another 4,000 goods vehicles to help ease gridlock.

The border delays sent shivers of apprehension around the U.K., including the fishing port of Brixham in southwest England, where much of the local catch of crabs, scallops and other high-value seafood is exported to EU countries.

Many British fishermen back Brexit because they want to wrest control over U.K. fishing waters from the EU — but they also rely on access to the European market.

“Today is a prime example of what is in store for Brexit,” said fishing boat skipper Sean Beck.

“If we can’t sell to Europe we’re finished,” he said. “There’s no future.”

Jimmy Buchan, chief executive of the Scottish Seafood Association, urged France to let in perishable goods. He said U.K. seafood companies, which export millions of pounds’ (dollars’) worth of seafood through Dover to the continent for Christmastime meals, were facing “disaster.”

Long lines formed outside some British supermarkets Monday as customers stocked up on supplies, despite official warnings that panic-buying was unnecessary.

Tim Rycroft, chief operating officer of the Food and Drink Federation, said “there is no need for shoppers to be concerned” just yet.

“There is still plenty of food in the supply chain,” he said. “Christmas is a time when warehouses are full, and it’s only if this isn’t resolved swiftly that there could be any kind of impact down at the retail end of the supply chain.”

Supermarket chain Sainsbury’s said that if the border did not reopen soon, “we will start to see gaps over the coming days on lettuce, some salad leaves, cauliflowers, broccoli and citrus fruit — all of which are imported from the Continent at this time of year.”

Jo Kearney in Brixham, England contributed to this story. 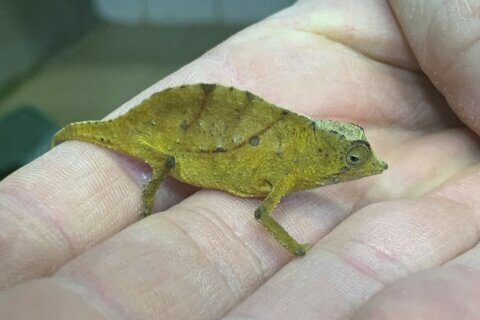 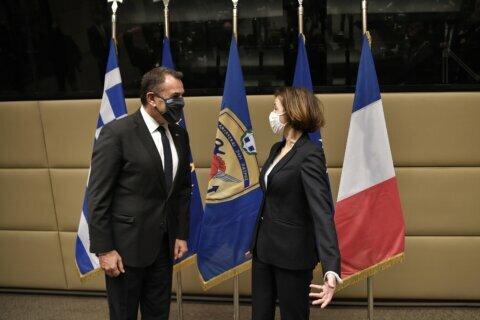