MOSCOW (AP) — Moscow has adopted sanctions against a number of German and French officials in response to the European Union’s sanctions over the poisoning of Russian opposition leader Alexei Navalny, Russia’s foreign minister said Thursday.

Navalny, a corruption investigator and longtime foe of Russian President Vladimir Putin, is in Germany recovering from what German authorities said was a nerve agent poisoning. Last month, EU foreign ministers imposed sanctions on six Russian officials and a state research institute over the incident.

Russian Foreign Minister Sergey Lavrov told reporters retaliatory sanctions against “senior staff of the offices of the leaders of Germany and France” have already been adopted. “Soon we will inform our German and French colleagues,” Lavrov said, without elaborating how many officials would be affected or revealing their names.

Those hit by the EU sanctions, which consist of an asset freeze and travel bans in Europe, include Alexander Bortnikov, the chief of Russia’s Federal Security Service, the KGB successor agency that is in charge of domestic security, and Sergei Kiriyenko, President Vladimir Putin’s deputy chief of staff.

The State Scientific Research Institute for Organic Chemistry and Technology was also targeted. The EU said that institute, which was responsible for destroying Soviet-era chemical weapon, was years ago involved in the development and production of chemical weapons, including the nerve agent Novichok allegedly used to poison Navalny.

The U.K. said it would also apply the EU sanctions and will continue them once it leaves a post-Brexit transition period at the end of the year.

Lavrov charged on Thursday that Navalny may have been poisoned in Germany — or on a plane that transported him from Russia to Berlin. “We have reasons to believe that everything that happened to him in terms of chemical warfare substances entering his body could have happened in Germany or on the plane… that took him to the Charite clinic,” Lavrov said.

Navalny fell ill on Aug. 20 during a domestic flight in Russia, and was flown to Germany for treatment two days later. His allies accused the Kremlin of poisoning its fiercest opponent.

The Kremlin denied involvement and reiterated that before Navalny’s transfer to Charite Hospital in Berlin, Russian labs found no sign of poisoning. Moscow has called for Germany and the Organization for the Prohibition of Chemical Weapons to provide their evidence, and bristled at Western leaders’ insistence that Russia answers questions about what happened to the politician. 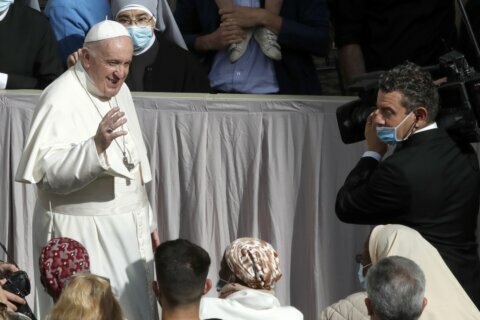 Anniversary of JP2 attack marked as Poles grapple with abuse