ATHENS, Greece (AP) — Airlines are rescheduling or canceling flights to, from and within Greece this week as air traffic controllers join a nationwide public sector strike scheduled for Thursday.

The strike is set to disrupt public transport, including ferry services between the islands and the mainland. The civil servants’ union called the strike on a variety of demands, including the increase of coronavirus-related protective measures in workplaces and in schools, mass hirings for the health and public transport sectors, and salary increases for civil servants.

Public transport workers are also calling for workers to be allowed to undergo tests for COVID-19 at their companies’ expense.

Aegean airways and Olympic Air announced Tuesday they were canceling all Thursday flights. Another two dozen international and domestic flights were being rescheduled on Wednesday, when air traffic controllers will be holding a six-hour work stoppage.

Greece has seen a significant surge in coronavirus cases and deaths that is straining the country’s health system.

Although the government has carried out mass hirings of medical workers since the pandemic struck and has more than doubled the number of intensive care beds in the country since mid-2019, many intensive care units, particularly in northern Greece where the outbreak has been most severe, are near or at their capacity. Health authorities have appropriated two private clinics in the northern city of Thessaloniki and their staff, to be used for coronavirus patients.

Prime Minister Kyriakos Mitsotakis announced on Tuesday that ICU doctors hired on temporary contracts during the pandemic would have their contracts made permanent.

“It is an act of recognition by the state for the important work they performed during the pandemic, but there is also an imperative need to staff the new intensive care units that have opened in recent months,” Mitsotakis said.

A second nationwide lockdown was imposed earlier this month until Nov. 30, although the restrictions will almost certainly continue into December. 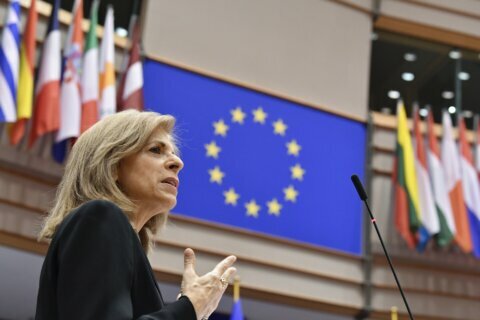