THE HAGUE, Netherlands (AP) — Farmers angry at the Dutch government’s policies to reduce nitrogen oxide emissions protested Tuesday in The Hague, snarling traffic as they drove their tractors into the center of the city.

Members of the Farmers Defence Force group who converged on the city from around the country wanted to drive past King Willem-Alexander’s palace in a forest on the edge of The Hague, but police and the municipality banned the move.

One representative of the farmers, Sieta van Keimpema, said the coronavirus pandemic was hampering farmers’ efforts to engage with lawmakers.

“The whole democratic decision forming is being frustrated,” she told national broadcaster NOS.

After their peaceful protest, the farmers drove their tractors out of the city past the rear entrance to the grounds of the royal palace, which was heavily guarded by police.

The Dutch farmers argue that they are being unfairly targeted by measures to cut back emissions near areas in the densely populated Netherlands designated as protected natural habitats.

The Dutch agriculture sector is crucial to the Dutch economy. Farmers’ organization LTO says exports from the country’s nearly 54,000 farms and agricultural businesses were worth 90.3 billion euros ($98.3 billion) in 2018.

A banner on one tractor heading toward The Hague summed up farmers’ concerns about their livelihoods and the European nation’s prosperity. It read simply: “No future without farmers.”

Follow all AP developments on climate change issues at https://apnews.com/Climate 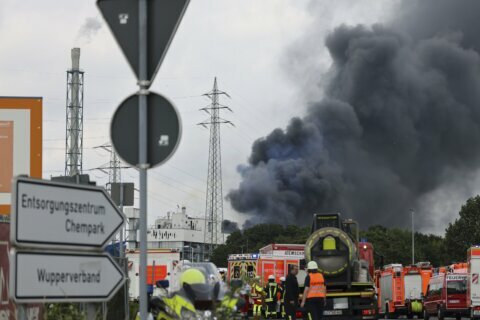