UK’s Johnson promises to use pandemic as catalyst for change

LONDON (AP) — Prime Minister Boris Johnson on Tuesday promised to use the COVID-19 pandemic as a catalyst to build a stronger Britain led by private enterprise, and took aim at “potshot, snipeshot” opponents who want to prolong government bailout programs forever.

In a sometimes combative speech to his Conservative Party, Johnson said simply defeating the virus wasn’t enough, because history has shown that “events of this magnitude” often lead to social and economic change.

“We see these moments as the time to learn, and to improve on the world that went before, and that’s why this government will build back better,” Johnson said in a video address to the annual party conference, which is being held online this year due to the pandemic.

The speech was an effort to inject optimism into the political debate and shift focus away from the government’s response to the pandemic, which has killed more than 42,000 people in Britain, the highest death toll in Europe. People from across the political spectrum have criticized the government’s test and trace system, and members of Johnson’s own party have opposed restrictions aimed at slowing the spread of the disease.

In his 30-minute speech Johnson underscored previous pledges to hire more nurses and police officers, upgrade highways and railroads, and make Britain a world leader in renewable energy. This will give private industry the tools it needs to build a stronger, more equitable economy, he said.

Johnson, who was hospitalized with COVID-19 in April, added that his government has had to take tough decisions during the pandemic and rejected the opposition Labour Party’s calls for government spending to rebuild the economy.

“We have no time now to focus on Captain Hindsight and his regiment of potshot, snipeshot fusiliers,” Johnson said, echoing a barb he has directed at Labour leader Keir Starmer in recent weeks.

While the continuing crisis has sidelined other initiatives, Johnson has continued to push his environmental agenda. He pledged Tuesday that every home in Britain will be powered by wind energy in a decade as the government kick-starts a “green industrial revolution’’ that will create hundreds of thousands of jobs.

The government will invest 160 million pounds ($208 million) in ports and factories to support production of the next generation of wind turbines, Johnson said. That is a tiny fraction of what it will cost to reach his goal, as the U.K. currently gets about one-sixth of its electricity from wind, or enough to power 18.1 million homes, according to statistics from renewableUK, an industry association.

Johnson pledged to back a wide range of wind power projects, including “windmills that float on the sea,″ and sought to portray himself as a visionary.

“You heard me right,” he said. “Your kettle, your washing machine, your cooker, your heating, your plug-in electric vehicle — the whole lot of them will get their juice cleanly and without guilt from the breezes that blow around these islands.” 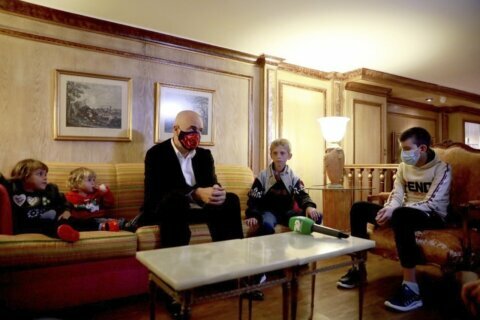