LONDON (AP) — British Prime Minister Boris Johnson defended his handling of the coronavirus pandemic on Sunday despite weeks of rising infections, but warned that the country faced a “bumpy” winter ahead.

Britain has Europe’s highest coronavirus death toll, at more than 42,400, and Johnson’s Conservative government is facing criticism from all sides. Opponents say tougher social restrictions are needed to suppress a second wave of COVID-19 that is already sweeping the country. But many in Johnson’s right-of-center party argue that restrictions must be eased to save the battered economy.

Johnson told the BBC the government had to strike a difficult balance and he couldn’t “take a course that could expose us to tens of thousands more deaths in very short order.”

“It is a moral imperative to save lives … but on the other hand, we have to keep our economy moving. That is the balance that we are trying to strike,” he said.

Britain went into a national lockdown in March, with most businesses closed and all but essential travel barred. Restrictions began to be lifted in June as the pandemic tide receded. But like other European countries, daily new coronavirus infections began to rise again when pubs and restaurants reopened, children went back to school and students returned to university.

The U.K. is now under national restrictions on socializing, including a 10 p.m. curfew for bars and restaurants, and groups limited to six, with areas of high infection facing stricter local measures, which Johnson and other ministers have sometimes struggled to explain clearly. Critics say months of mixed messages and changes of advice on everything from wearing masks to whether or not to work from home has left people confused and exhausted.

A national test-and-trace program to find people who have been exposed to the virus has also had persistent problems, and is failing to reach more than a quarter of infected people’s contacts.

“The prime minister is governing in hindsight,” Starmer told the Observer newspaper. “So he charges forward, not recognizing the problem, has a car crash, looks in the rear mirror and says: ‘What’s all that about?’”

Britain recorded 12,872 new coronavirus infections on Saturday, by far the highest daily total since the outbreak began, although the figure includes a backlog of previously unreported cases. The daily number can’t directly be compared to U.K.’s peak in April because many more tests are being performed now.

The number of hospitalizations and deaths in Britain is also rising, but remains far below the U.K.’s springtime peak. Another 49 COVID-19 deaths were reported on Saturday, compared to almost 1,000 a day at the height of the outbreak.

Johnson acknowledged that many people feel “fatigue” after months of restrictions and expressed hope that progress on vaccines and testing would “change the scientific equation” in the next few months, allowing a return to normality.

But he warned “it’s going to continue to be bumpy through to Christmas. It may even be bumpy beyond.” 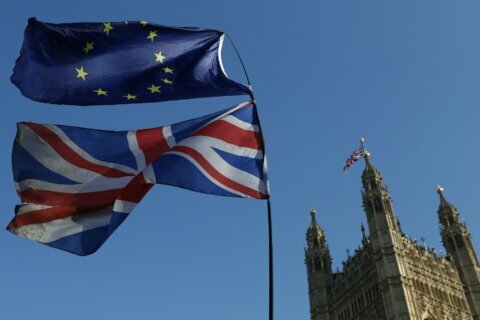