THANKSGIVING NEWS: What to do with leftovers | Takeout options instead in DC | Holiday changes across the US | Thanksgiving dinner for pets?
Home » Europe News » Syrian held in German…

BERLIN (AP) — A young Syrian has been arrested over an attack earlier this month on two German tourists, one of whom later died, in the eastern German city of Dresden which authorities said Wednesday appears motivated by Islamic extremism.

Justice Minister Christine Lambrecht said federal prosecutors had taken over the investigation after determining the attack may have been an act of terrorism, and that it was being given the “highest priority.”

“Islamic terrorism is an ongoing and large threat to our society that we need to act against strongly,” she said in a statement. “We need the utmost vigilance and decisive action from our police, security authorities and the judicial system.”

The 20-year-old was arrested on Tuesday evening, police and prosecutors in Dresden said.

The two visitors from western Germany were attacked and wounded in downtown Dresden on Oct. 4. One of them died later at a hospital. A knife that investigators believe is linked to the attack was found at the scene.

Dresden prosecutors said the suspect has been in Germany since 2015. A large number of Syrians and other migrants arrived in Germany that year.

Lambrecht’s comments came after German media reported the man was known by authorities to have links to Islamic extremism, including having served time in prison for trying to recruit members for a foreign terrorist organization and violent crimes. 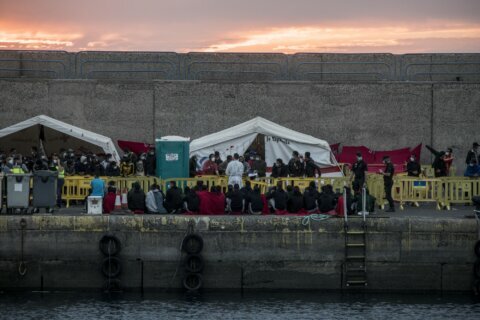 Tensions rise over housing of migrants on Spanish islands