ROME (AP) — Americans may love Naples for its most famous export, pizza. But the governor of Italy’s southern region had choice words for the exported American holiday of Halloween as Naples buckles under surging coronavirus infections.

Campania Gov. Vincenzo De Luca blasted the holiday as a “stupid American extravagance” and a “monument to imbecility” in announcing a 10 p.m. curfew in Naples and the surrounding region over Halloween weekend.

De Luca has blamed “irresponsible” young people for Campania’s surge in infections, and this week closed schools for in-person learning for two weeks.

His bah-humbug to Halloween was in keeping with that tough line. While Italy has long celebrated the religious holidays of All Saints and All Souls, Halloween has only taken off in the last generation, most strongly in the Italian south.

Campania was largely spared the first wave of COVID-19, but the region is now one of the worst-hit in Italy and is reaching a critical stage given it has far fewer hospital beds, intensive care units and medical personnel than other regions of a similar size.

De Luca won praise — and another term in office — for taking a tough line to keep infections down during Italy’s initial outbreak. But his decision to shift all learning online prompted criticism from the education minister and protests from parents.

His Halloween rant sparked some ridicule on social media Saturday with the hashtag #allouin, which is how “Halloween” is sometimes written in Italian.

The rant was included in one of De Luca’s Facebook videos on COVID-19, which feature his colorful language and obvious frustration that Neapolitans are flouting social-distancing rules and mask mandates.

“How can you be so irresponsible?” he demanded Friday of students who wear their masks around their chins rather than over their noses. 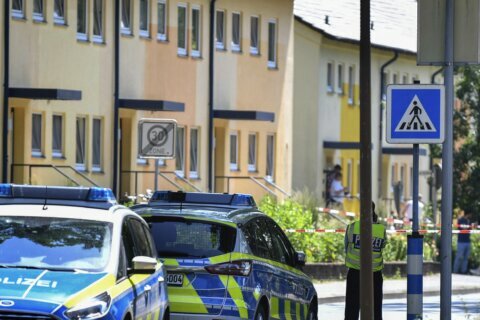