BRUSSELS (AP) — The European Union unveiled Wednesday new plans to help slow down global warming, including a strategy to tackle highly polluting methane gas emissions and a plan to renovate millions of old buildings around the 27-nation bloc to make them more energy efficient.

The EU’s executive arm, the European Commission, also made public a scheme to limit environmental damage from dangerous chemicals, and to restrict their use in toys, cosmetics, detergents and products that might touch food.

The EU sees itself as a world leader in climate and environmental policy. It wants to slash greenhouse gas emissions to at least 55% of what they were in 1990 over the next decade. That goal is a stepping-stone toward the broader aim of producing zero net polluting emissions across Europe by 2050.

“Tackling climate change and caring for our environment requires us to rethink the way we live,” Commission President Ursula von der Leyen said before the new plans were made public. “We are taking the steps, one by one, to get there.”

One of the biggest causes of climate change is methane gas emissions, second only to carbon dioxide, and the gas also causes serious health problems. Most emissions come from the energy, agriculture and waste sectors.

“To reach our 55% ambition we would need to reduce our methane emissions by one third,” EU Energy Commissioner Kadri Simson told reporters, as EU leaders prepare to thrash out on Thursday an agreement on how to move forward on the climate targets by the end of the year.

A key priority of the strategy is to improve the way methane emissions are measured and reported, and use EU satellites to locate major emitters or find major gas leaks. Energy companies would be pressed to repair leaks more quickly and new rules proposed to limit the release and burning of waste gases.

Reducing farm emissions would also focus on better data collection about the problem and sharing ideas about the best kinds of animal diets, breeding management techniques and methane reducing technologies. Cutting landfill gases or using them as an energy source is the focus for the waste sector.

EU Greens party lawmakers insist that the proposals do not go far enough to meet the bloc’s goals.

“The European Commission is only scratching the surface and limiting itself to minor issues, such as the obligation to plug leaks and producing statistics,” said Dutch lawmaker Bas Eickhout. ”Just counting emissions alone will not help when we urgently need action to reduce them.”

With its renovation strategy, the Commission aims to double the number of old buildings that are made energy efficient over the next 10 years. It estimates that 35 million buildings could be refurbished, creating up to 160,000 “green” jobs in the construction sector and helping to reduce energy bills.

“It’s not going to be easy. It’s not just throwing money at it, we need to get the right legislation in place” and the best kinds of projects, said Commission Executive Vice-President Frans Timmermans. But he said that if it can be done, “everybody wins,” especially small businesses that get the work contracts.

The Commission’s chemicals strategy aims to encourage the production of safer chemicals. Harmful substances that damage people’s immune and respiratory systems would be phased out of consumer products, and a closer eye kept on chemicals that pose health risks when used in a cocktail with other substances. It also seeks to raise public awareness about chemical use, and ensure that the laws on how they’re handled are better enforced. 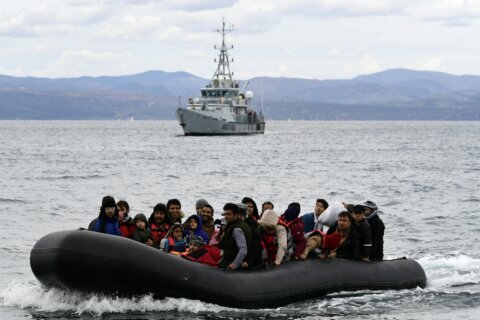