The newspaper’s many critics worldwide say its editorial staff is attacking Islam itself; the people who work for Charlie Hebdo says they are calling out intolerance, oppression and a political form of Islam that threatens democracy. But with freedom of expression as its credo, the publication routinely pushes the limits of French hate speech laws with often sexually explicit caricatures that take on or offend nearly everyone.

Its decision to publish new cartoons this week ridiculing its opponents in the Islamic world formed the backdrop for yet another attack Thursday in France, where three people were fatally attacked in a church.

Charlie Hebdo has lampooned dead child migrants, virus victims, dying drug addicts, world leaders, neo-Nazis, popes, bishops, Jewish leaders, and other religious, political and entertainment figures. This week’s issue features a cartoon of the funeral of a beheaded teacher, showing officers carrying two coffins, one for the body, one for the head.

Since a trial opened last month over the 2015 attack that killed 12 of its cartoonists, the newspaper has chronicled the proceedings daily and devoted nearly half of its weekly covers to mocking Islamic extremism,

“We need strong actions to stop Islamism but also to condemn the slightest gesture, the slightest intolerant or hateful word toward French people of immigrant backgrounds. Because France isn’t divided between Muslims and non-Muslims, between believers and non-believers, between people with French roots and French people of immigrant backgrounds,” read this week’s editorial from Charlie Hebdo’s editor, who goes by the name Riss. “No, France is divided between democrats and anti-democrats,”

The paper’s circulation is small, and many French people find it disgusting or extreme, but defend its right to exist.

The paper drew ire for reprinting caricatures of the Muslim Prophet Muhammad originally published by a Danish magazine in 2005 and republished the following year by Charlie Hebdo . Those cartoons were seen as sacrilegious in Islam, and many Muslims worldwide felt genuinely hurt by them — but condemned the violence that has come in response.

In 2011, Charlie Hebdo’s offices were firebombed after it published a spoof issue that “invited” the prophet to be its guest editor. His caricature was on the cover.

A year later, the newspaper published more Muhammad drawings amid an uproar over an anti-Muslim film. The cartoons depicted Muhammad naked and in demeaning or pornographic poses. The French government defended free speech even as it rebuked Charlie Hebdo for fanning tensions.

In January 2015, two French-born al-Qaida extremists angered by the caricatures stormed its newsroom and killed 12 people, including the chief editor and several cartoonists.

Charlie Hebdo hasn’t backed down. The day the trial into that 2015 attack opened, it reprinted the original prophet caricatures.

Weeks later, a Pakistani youth stabbed two people outside Charlie Hebdo’s former offices, citing the republished cartoons. On Oct. 16, a Chechen refugee beheaded a teacher outside Paris who had shown the caricatures to his class, for a debate about free expression.

In response, French President Emmanuel Macron firmly defended Charlie Hebdo’s freedom to print caricatures and spoke out against Islamism, drawing protests and calls for boycotts around the Muslim world, as well as calls for violence against France from some extremist voices.

Sonia Mejri, the disenchanted French widow of the Islamic State commander who recruited one of the 2015 attackers, testified from prison during the trial. At the end of her testimony, she addressed a message to Charlie Hebdo’s journalists, including those sitting in the courtroom.

“Don’t stop. It’s important. It’s truly what they detest the most,” Mejri said. “You represent liberty. What they want is to create a malaise in society.” 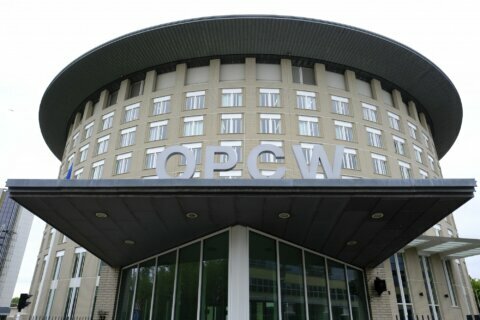