LONDON (AP) — Police in London said 65 people were arrested Tuesday during climate change protests near the Houses of Parliament.

The Metropolitan Police said the number of arrests for public order offenses during the Extinction Rebellion demonstration was correct as of 4 p.m. local time.

Hundreds of protesters gathered near Parliament to urge returning lawmakers to support a climate emergency bill and to prepare for a climate crisis.

Waving signs with slogans such as “There is No Planet B” and “We Want to Live,” demonstrators stopped traffic near Parliament Square.

Some activists sat in the middle of the road next to Parliament Square, stopping traffic. Dozens of police officers swooped in to carry them away to vans parked nearby.

Sarah Lunnon, a prominent member of Extinction Rebellion, said failing to act on the climate issue will have “a catastrophic impact” on everyone’s future.

“Of course we’re in the middle of a pandemic, but we’re balancing the risk,” she said. “This is the biggest issue facing us.”

The protest near Parliament was part of two weeks of civil disobedience planned for London, Cardiff and Manchester.

Last year, more than 1,700 arrests were made during Extinction Rebellion’s 10-day “Autumn Uprising,” which disrupted traffic and business activity in several parts of the U.K. 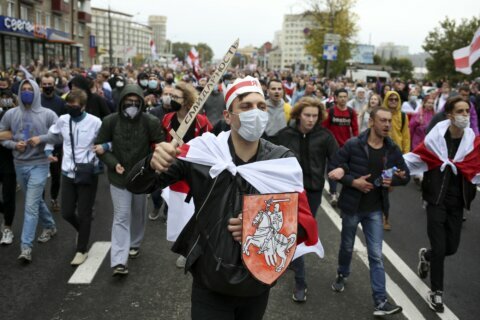