ATHENS, Greece (AP) — Greek authorities launched a large search and rescue operation Friday following a distress call from a vessel carrying dozens of migrants, which was caught in a powerful storm that lashed western Greece with hurricane-force winds and heavy rain, causing power outages and flooding.

Coast guard officials said at least three merchant ships reached the area where the vessel, believed to be carrying more than 50 people, was reported in trouble off the southwest Peloponnese region but had not found any trace of it by late afternoon.

Coast guard vessels and rescue helicopters were unable to join the operation due to the high winds from the powerful tropical-style storm named Ianos.

The storm, with winds exceeding 110 kilometers per hour (70 miles per hour), reached the western mainland Friday. Computer models suggested that the storm would not directly affect Athens but heavy rainfall was expected in the Greek capital from late Friday.

Parts of central Greece were also struck by the storm, with homes evacuated and several motorists reported stuck in their cars on flooded roads. Schools and stores were closed, and ferry services were suspended in many areas in western Greece as authorities advised residents to remain indoors. “We are expecting the storm to progress with the same intensity for the six to nine hours in western Greece and then, weakened, see it head southward,” Civil Protection chief Nikos Hardalias said. “But areas that are not directly affected … will see a large volume of water with heavy rainfall.” 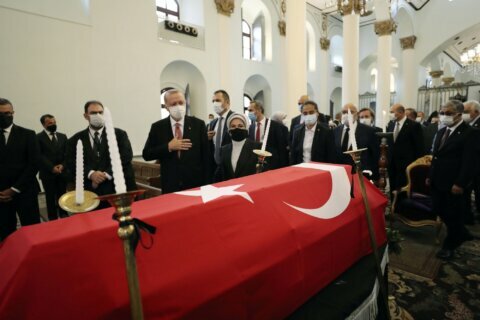