Madrid struggles as center of pandemic’s 2nd wave in Europe

The Madrid regional government is further restricting family reunions and social gatherings to curb a sharp spike in confirmed coronavirus cases as schools are set to re-open, although officials said Friday that new infections in and around the Spanish capital were being brought under control.
Listen now to WTOP News WTOP.com | Alexa | Google Home | WTOP App | 103.5 FM

MADRID (AP) — A mix of worry and resignation is discernible behind the masks of parents picking up school textbooks in a working class Spanish neighborhood with a steady rise in new coronavirus infections.

Authorities in Madrid, the European capital experiencing the worst second-wave outbreak, are introducing new curbs on social gatherings starting Monday. The restrictions coincide with the opening of most schools, which is perceived as a potential tipping point in the battle against the virus.

The focus is especially on areas like San Diego, a culturally diverse neighborhood of narrow streets and small apartments where many residents continued commuting to work over the summer, often to do manual labor and unstable jobs.

“The south of Madrid is where the north’s cheap labor crams into small apartments,” said Simona Filip, 44, a migrant from Romania whose 6-year-old son is set to go back to school on Tuesday.

Her son struggled with online learning ever since Spain went into lockdown in mid-March and a non-profit organization gave the family an electronic tablet for the boy to use.

“The kid needs proper studies because I can’t help him and my husband needs to work,” Filip told The Associated Press this week. “We have no other choice but to hope that the school will keep him safe.”

In the past two weeks, Spain has had a cumulative incidence of nearly 217 confirmed virus cases for every 100,000 residents, four times the European average. But in the southern Vallecas district with San Diego at its center, that index closely watched by pandemic experts rose to 1,300 last week and remained on Friday above 1,000 cases.

Jorge Nacarino, president of the local neighbors’ association, said that poverty and years of inadequate investments for the area are behind the spike. Tiny, cheap apartments built five to eight decades ago have not been replaced and now house extended families or groups of migrants who can’t afford real estate price hikes in other neighborhoods.

As happened during the first wave, social distancing is again difficult in the apartments, and many of those who had contact with people already infected with the coronavirus can’t afford to quarantine and miss work, Nacarino said.

“We need a serious plan of public investment in the area, from health centers and sports facilities to social programs,” he said. “It’s been through decades of neglect that San Diego has fallen behind the development seen in surrounding areas.”

With Spanish unemployment on the rise in the wake of virus-induced lockdowns, “narcoflats,” or vacant apartments taken over by gangs as drug distribution and consumption dens, are likely to spread, Nacarino said. So are gambling parlors, which are seen as a source of social problems in the area, with at least seven establishments operating along a short stretch of one of San Diego’s main streets.

Since most of new recent infections have been tied to gatherings in private homes, the regional government on Friday extended to indoor meetings a ban on outdoor gatherings of more than 10 people. Attendance to funerals, burials, weddings or religious celebrations, as well as group visits to museums or guided tourism will also be restricted starting on Monday, authorities said.

That comes on the heels of a crackdown on nightlife entertainment, early closure for the city’s parks to prevent youth from drinking alcohol and partying in large groups, and a ban on outdoor smoking, all of them measures announced in response to Madrid’s spiral of new cases since mid-July.

The Spanish capital, home to 6.6 million and a magnet for workers from around the country, accounted last week for one-third of Spain’s new virus infections. At least 16% of beds in Madrid’s hospitals are currently occupied by patients with COVID-19, the highest rate of all Spanish regions.

The situation “has nothing to do with what we went through a couple of months ago,” on Friday said the region’s health chief, Enrique Ruíz Escudero, referring to the peak of the pandemic in April, when makeshift hospitals had to be built and intensive-care-units expanded to cope with the influx of COVID-19 patients.

“The pandemic in the Madrid community is stable and is controlled,” the official said at a press briefing, arguing that some of the effects of recent measures are starting to have an effect. “We are worried … but we are not alarmed.”

Madrid is also expanding the number of contact tracers, one of the weakest links in dealing with the new wave of outbreaks, and purchasing two million kits of rapid coronavirus tests.

Spain, which is edging to a half-million confirmed cases since February, is leading the pandemic’s second wave in Europe. At least 29,418 people have died in Spain during the pandemic, including 184 reported on Friday. But the real death toll is believed to be higher because many who died during the March and April peak of the outbreak were never tested.

The northern region of Navarra was Spain’s first to launch a new school year on Friday, with masks mandatory for all students aged 6 or above and social distancing measures in schools. 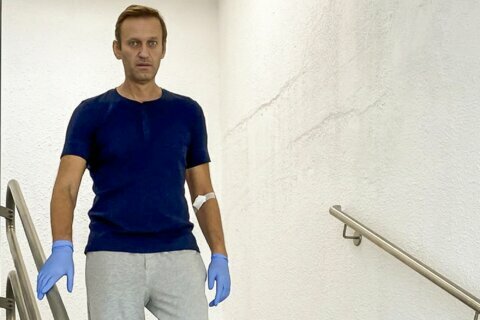 Russia’s Navalny accuses Putin of being behind his poisoning

Pompeo, Vatican butt heads on China after tensions spill out