Greece: 4 Afghans charged with arson for fire at Lesbos camp

MYTILENE, Greece (AP) — Four Afghan migrants were formally charged with arson Wednesday for their alleged involvement in fires that destroyed most of a large refugee camp on Greece’s eastern island of Lesbos, authorities said.

The men, who have not been named, were led to a court on the island and later returned to police detention after being given three days to prepare their testimony.

The fires swept through the overcrowded camp at Moria on two nights last week, prompting more than 12,000 migrants and refugees to flee. Nobody was hurt. Most of them remain without shelter, camped on a roadside near the gutted camp.

Two other migrants allegedly involved in setting the fires are minors who are being held by police on the Greek mainland but have not been formally charged. They were among around 400 unaccompanied minors from Moria who were flown to the mainland after the fires.

The Greek government maintains that the fires at Moria were set deliberately by migrants protesting confinement after the site was locked down due to an outbreak of COVID-19.

Athens on Tuesday urged the European Union to jointly run new refugee camps on Greece’s eastern islands as part of an overhaul of the EU’s migration policies.

“The images of the Moria camp are a painful reminder of the need for Europe to come together,” European Commission President Ursula von der Leyen said Wednesday during her state of the union address.

“Everybody has to step up here and take responsibility – and the commission will do just that,” von der Leyen told lawmakers at the European Parliament, adding that the commission was working on a plan for a new camp on the island.

“But I want to be clear: if we step up, then I expect all (EU) member states to step up, too. Migration is a European challenge ,and all of Europe must do its part,” she said.

Greek army personnel have been building a new camp on the island, using tents for emergency housing for asylum-seekers left homeless by the fire. But many are reluctant to go to a new facility they fear could end up like the squalid Moria camp.

The U.N. refugee agency’s representative in Greece, Philippe Leclerc, said about 1,100 people, mostly those considered vulnerable, had been housed at the new site by Wednesday afternoon, but that up to 8,000 could be accommodated. Leclerc encouraged more of the Moria camp’s former residents to move there.

Greek officials have said they could forcibly remove people from the road near the burned-out camp where they have been sleeping rough and take them to the camp if people refuse to go.

Leclerc noted that relocation to other European countries would only be for “a limited number of persons, in particular the unaccompanied children and some more vulnerable individuals.”

Several European countries have pledged to take in some of the unaccompanied minors who were staying in Moria.

“We asked for the support of other European countries to continue assisting Greece, which is hosting…more than 100,000 asylum-seekers and refugees,” Leclerc said.

He stressed violence was not a solution for migrants and refugees to get off the island.

“Despair is understandable, but it cannot justify the violence,” Leclerc said. “Violence…and burning will not provide any solution. We need (a) peaceful, orderly way of getting people out of Lesbos gradually. And this is what we are supporting,.” 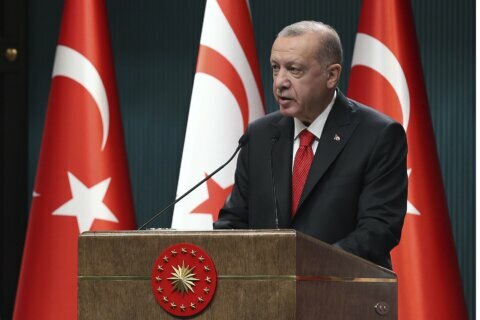 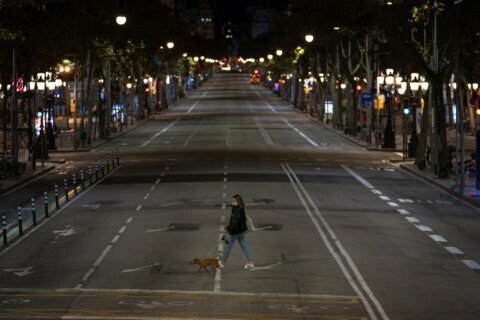