Carpenters put the skills of their Medieval colleagues on show on the plaza in front of Notre Dame Cathedral in Paris, France, Saturday, Sept. 19, 2020, the day honoring European heritage, by reproducing for the public a section of the elaborate carpentry used when the edifice was built. The elaborate wooden beams went up in flames in a devastating April 2019 fire that also toppled the spire of the cathedral, now being renovated. (AP Photo/Francois Mori)

PARIS (AP) — With precision and boundless energy, a team of carpenters used medieval techniques to raise up — by hand — a three-ton oak truss Saturday in front of Notre Dame Cathedral, a replica of the wooden structures that were consumed in the landmark’s devastating April 2019 fire that also toppled its spire.

The demonstration to mark European Heritage Days gave the hundreds of people a first-hand look at the rustic methods used 800 years ago to build the triangular frames in the nave of Notre Dame de Paris.

It also showed that the decision to replicate the cathedral in its original form was the right one, said Gen. Jean-Louis Georgelin, who heads the cathedral’s reconstruction.

“It shows … firstly that we made the right choice in choosing to rebuild the carpentry identically, in oak from France,” Georgelin said in an interview. “Secondly, it shows us the … method by which we will rebuild the framework, truss after truss.”

A debate over whether the new spire should have a futuristic design or whether the trusses should be made of fireproof cement like in the Cathedral of Nantes, which was destroyed in a 1972 fire, ended with the decision in July to respect Notre Dame’s original design and materials.

A total of 25 trusses are to be installed at an unknown date in the cathedral nave. Philippe Gourmain, a forestry expert working on the cathedral project, said the carpentry phase will not come before 2022.

“The problem of Notre Dame is not a carpentry problem. We have the wood. We know how to do it,” Gourmain said. “The big issue is regarding the stone.”

Some stones — which support the carpentry — were damaged by the fire and “it’s not so easy now” to find similar stone, he said.

French President Emmanuel Macron wants the cathedral reopened in 2024 in time for the Paris Olympic Games, a deadline that many experts have called unrealistic.

For the moment, the delicate task of dismantling melted scaffolding, which was originally erected to refurbish the now-toppled spire, continues. That job, started in early June, will be completed in October.

The soaring cathedral vaults are also being cleared of debris by 35 specialists on ropes. The organ with its 8,000 pipes was removed for repair in early August.

It is not yet known what technique will be used to create and install the wooden trusses.

The truss mounted for the weekend display is a replica of truss No. 7, more advanced that the first six trusses, which were “more primitive,” said Florian Carpentier, site manager for the team from Carpenters Without Borders team that felled the trees and used axes to cut the logs for the wooden frame. With rope cables and a rustic pulley system, the carpenters slowly pulled the truss they built in July from the ground where it was laid out.

“It’s a moment to see, ancestral techniques that last. There is the present and the past and it links us to our roots,” said Romain Greif, an architect who came with his family to watch the display. “It’s an event.”

In a final touch, once the No. 7 truss replica was raised on high, a carpenter shinnied up the wooden beams — to cheers — to tie an oak branch to the top of the triangular structure, a symbol of prosperity and a salute to the workers, a tradition still honoured in numerous European countries. 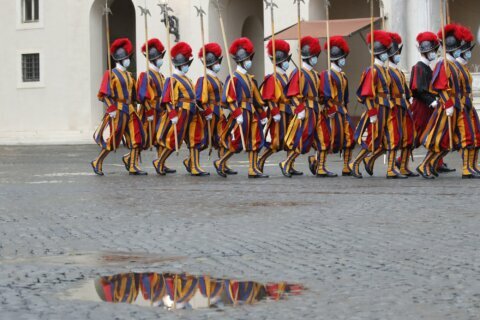 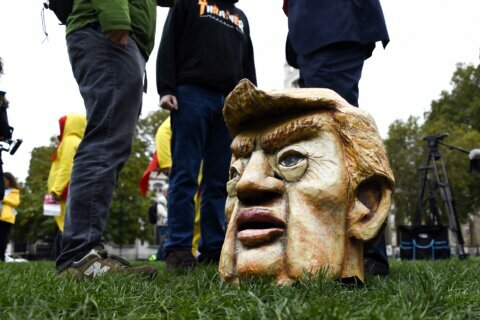