VIENNA (AP) — U.S. Secretary of State Mike Pompeo on Friday called for the world to unite around a long-shot American bid to indefinitely extend a United Nations arms embargo on Iran.

As members of the U.N. Security Council voted remotely on a U.S. resolution to prolong the embargo that is widely expected to fail, Pompeo said it was “nuts” to allow Iran to buy and sell weapons at will. Pompeo spoke well before an announcement of the results of the vote, which many diplomats believe will end in an embarrassing defeat for the Trump administration.

“We ask nations to urge the U.N. Security Council to renew the arms embargo on Iran,” Pompeo said in Vienna, where he met with the U.N. nuclear watchdog’s head, Rafael Grossi, and with senior Austrian officials. “We can’t allow the world’s biggest state sponsor of terrorism to buy and sell weapons. I mean, that’s just nuts.”

The anticipated defeat of the resolution in New York likely would set the stage for a showdown between world powers over whether all international sanctions lifted under the 2015 Iran nuclear deal can or should be reimposed.

“We’re urging the whole world to join us. This isn’t about the JCPOA,” Pompeo said, using the acronym for the nuclear deal known as the Joint Comprehensive Plan of Action.

Whatever the result of the vote, the Vienna-based International Atomic Energy Agency that Grossi heads will continue to play a major role in the future of the nuclear deal, and Pompeo called for all nations to show “support for IAEA Director General Grossi’s critical mission to ensure that all countries comply with their international nuclear safeguard requirements.”

“That mission is all the more important given the Islamic Republic of Iran’s failure to address the IAEA’s questions about its nuclear activities,” Pompeo said. “The international community must speak with a single voice: Iran must provide full, transparent and immediate cooperation with the IAEA.”

Speaking to reporters after the meeting, Grossi said Iran had still not granted his agency access to certain sites. “I requested Iran to grant us access,” he said. “This hasn’t happened yet, but we are working, we’re working on that. My objective is to get this access to continue the verification work, which is essential for the international community.”

The U.S. resolution to indefinitely extend the Iran arms embargo, which is due to expire in October under the terms of the nuclear deal that President Donald Trump withdrew from in 2018, is widely expected to fail due to European resistance and strong opposition from veto-wielding council members Russia and China.

The council began voting on Thursday evening by email because of the COVID-19 pandemic, and results are expected to be announced Friday evening. It is likely the resolution will not get the minimum nine “yes” votes in the 15-member Security Council for Russia and China to use their vetoes.

American officials, including Pompeo, have said failure to extend the embargo will likely be met by the U.S. invoking the so-called snapback procedure that would reimpose all U.N. sanctions lifted by the nuclear deal. The other participants maintain the U.S. no longer has standing to invoke the snapback since it withdrew from the deal, but Washington argues that it retains that right as an original participant and permanent member of the Security Council, which endorsed the deal.

Pompeo would not be drawn on whether the U.S. would immediately try to invoke the snapback if the resolution fails. “We hope that we’ll be successful. When we see the results of that we’ll make the decision about how to move forward,” he said.

The U.S. initially circulated a resolution to the 15-member council to indefinitely extend the arms embargo that was seven pages long and had 35 paragraphs. This week, following discussions with council members who voiced objections to a number of provisions, it circulated a revised draft that stripped the resolution to just four paragraphs calling for an indefinite extension.

The foreign ministers of Russia and China, in separate letters to U.N. Secretary-General Antonio Guterres and the Security Council last month, were sharply critical of the U.S. effort to indefinitely extend the arms embargo. They gave every indication they would veto any such resolution if necessary.

Diplomats from several countries that remain committed to the nuclear deal have expressed serious concern that extending the arms embargo would lead to Iran’s exit from the agreement and its hastened pursuit of nuclear weapons.

Trump reimposed crippling sanctions on Iran after he unilaterally withdrew America from the nuclear accord between Iran and Western powers in May 2018. Iran later responded by slowly abandoning nearly every aspect of the agreement, although it still allows U.N. inspectors access to its nuclear sites. The sanctions have caused Iran’s oil exports, the country’s main source of income, to fall sharply.

Iran’s Foreign Ministry has accused the U.S. of “economic terrorism.”

Pompeo, before his talks with Grossi, met with senior Austrian officials, including Prime Minister Sebastian Kurz and Foreign Minister Alexander Schallenberg to discuss European energy independence, the security of 5G wireless networks and the threats to both posed by Russia and China.

The United States and Austria, along with other countries in Europe, notably Germany, are at odds on numerous issues, including the construction of a Russia-to-Germany pipeline known as NordStream 2 that the Trump administration says is a security threat to the U.S. and its allies in Europe because it will make them dangerously beholden to Moscow for energy.

The Trump administration has imposed sanctions and threatened more penalties on European companies and countries that participate in the nearly completed project. Schallenberg said Austria “deeply regretted” the imposition of U.S. sanctions over the pipeline, and Pompeo acknowledged deep disagreement on the matter, saying the two nations might have to “agree to disagree.”

Pompeo is in Austria on the third leg of a four-nation tour of eastern and central Europe that has already taken him to the Czech Republic and Slovenia. He will wrap up the trip in Poland on Saturday. 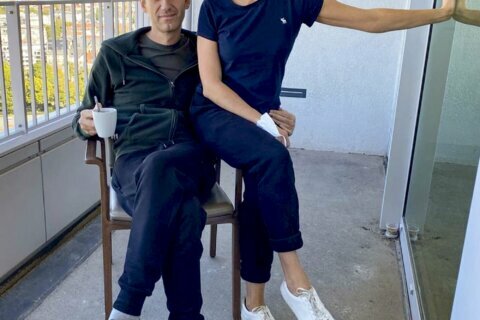 Navalny says nerve agent was found ‘in and on’ his body