Italian island runs out of room to quarantine new migrants

ROME (AP) — About 250 Tunisian migrants in several small boats have reached a tiny Italian island that has run out of room to quarantine them as required by Italy’s anti-coronavirus measures, local officials said Saturday.

The Sicilian newspaper Giornale di Sicilia quoted Lampedusa Mayor Toto’ Martello as saying the island can’t wait until the government sends a chartered ferry where the migrants can be held for 14 days to fulfill the country’s quarantine requirement.

The island’s migrant holding center, which was built for a maximum capacity of 95 people, was already holding 950 when the latest passengers arrived, Martello said. The 250 who arrived between Friday night and Saturday must stay on the dock for now, until the promised ferry arrives or some other solution is found.

Seven boats directly reached Lampedusa’s shores, while an eighth boat needed assistance as it approached the island after setting off from Tunisia’s Mediterranean coast.

Overall, the mayor said 250 boats carrying 5,000 migrants have reached the southern Mediterranean island in the last month. Many passengers were transferred to migrant residences on Sicily on commercial ferries or other vessels.

“I don’t understand why the premier doesn’t declare a state of emergency” on Lampedusa, Martello told the newspaper.

Arriving migrants have been linked to several dozen recent coronavirus clusters. Concern is growing among health authorities that Italy’s daily toll of new confirmed cases, which had been largely contained by June, could again start surging out of control.

Unless they come from countries specifically exempted from mandatory precautionary measures, such as most European Union countries and some others, foreigners must undergo a 14-day quarantine upon entering Italy.

Tunisian migrants fleeing their country’s worsening economic situation aren’t generally considered eligible for asylum. Italy has a repatriation deal with Tunisia for weekly flights to send back those who fail to obtain permission to stay. The flights were suspended during the brunt of Italy’s coronavirus epidemic but resumed on July 16.

Italian Interior Minister Luciana Lamorgese told the Corriere della Sera newspaper that Italy is trying to arrange with the Tunisian government the possibility of using boats to increase the number of weekly repatriations.

“Local communities are rightly sensitive to the subject of health safety” from the migrants, he said. 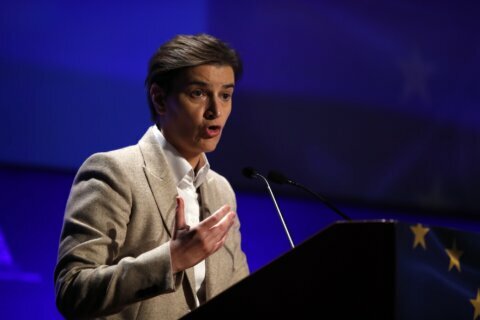