BELGRADE, Serbia (AP) — Serbian authorities on Thursday banned gatherings of more than 10 people in the capital, Belgrade, after two nights of violent clashes between police and thousands of demonstrators protesting coronavirus lockdown measures.

Thousands of people defied the ban Thursday night to stage a sit down protest in front of Parliament, but that gathering and others in at least two other Serbian towns remained peaceful despite a large police presence.

Many protesters wore white T-shirts with the inscription, “Sit Down, Don’t Be Set Up” — referring to widespread claims that the violence in the previous nights’ protests was staged by hooligan groups close to the authorities to smear the opposition groups’ image.

“This is how the protest should really look like, without their mad dogs present,” said one of the main opposition leaders, Dragan Djilas.

In addition to limiting gatherings, businesses in closed spaces, such as cafes, shopping malls or shops, were ordered to operate shorter hours.

“The health system in Belgrade is close to breaking up,” Serbian Prime Minister Ana Brnabic said. “That is why I can’t understand what we saw last night and the night before.”

The clashes followed an announcement from President Aleksandar Vucic that further lockdown measures were likely as the outbreak in the country was spiraling out of control, especially in Belgrade, where 80 percent of new cases were recorded. At least 17,342 cases and 352 deaths have been recorded throughout Serbia.

Although the new government measures passed Thursday don’t include an originally planned weekend curfew, the limit on gatherings effectively means a ban on protests.

After initially handling the pandemic relatively well, Vucic and his government have been accused of allowing the crisis to spin out of control in order to hold a June 21 election that tightened his grip on power.

Opponents blame the autocratic president for contributing to the large spike in deaths and new cases after he entirely lifted previous very tight lockdown measures. Mass gatherings at soccer and tennis matches and at nightclubs were allowed despite warnings by experts that this could lead to a spike in infections.

The U.S. Embassy said in a statement Thursday it was “deeply concerned” by the violence.

“We condemn all violence, including what appeared to us to be coordinated attacks on police seemingly intended to provoke overreactions, as well as what appeared to the use of excessive force by police,” it said.

Dozens of people were injured in the two days of clashes in Belgrade and other cities.

“Such violence is inadmissible and police will use all means to stop it,” Rebic said in a statement.

Rights watchdog Amnesty International, however, blamed the police for applying “heavy-handed measures” against the demonstrators.

“Images of Serbian police firing tear gas and stun grenades indiscriminately into the crowd, and of protesters and bystanders being charged by mounted police and beaten by police in riot gear, raise serious concerns,” Amnesty International’s Balkans researcher Jelena Sesar said in a statement.

Videos on social media appeared to show police severely beating up protesters. In one, a protester was seen being hit and kicked by several officers and dumped on the sidewalk, seemingly unconscious. The authenticity of the videos could not be independently verified.

Under apparent pressure from the protesters, the Serbian president backtracked Wednesday on his plan to implement a weekend curfew, claiming the measure could not be carried out without proclaiming a nationwide state of emergency.

In an Instagram post on Thursday — from inside the plane taking him on an official visit to France — Vucic said the state will curb unrest, and urged his followers not to confront violent demonstrators.

“I promised that we will know how to preserve peace and stability despite criminal hooligan violent attacks that have shocked us all,” he said.

Vucic has accused foreign intelligence services of being behind the unrest. He has described the protests as “political” and aimed at weakening Serbia in its talks with Kosovo, a former province whose 2008 declaration of independence Belgrade does not recognize.

Although Vucic stopped short of identifying the alleged foreign spy agencies, tabloids under his control accused pro-Russia far-right groups of fueling the violence. The Russian ambassador to Serbia on Thursday vehemently denied accusations that Moscow was behind the unrest. 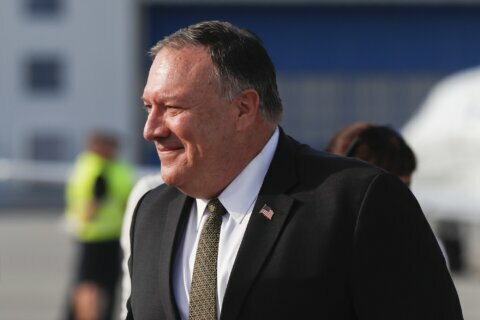