DONETSK, Ukraine (AP) — Residents of separatist-controlled regions in eastern Ukraine who have Russian citizenship are travelling to Russia to vote on constitutional amendments that would allow President Vladimir Putin to remain in power until 2036.

Authorities of the self-proclaimed Luhansk and Donetsk People’s Republics have organized bus services to polling stations in the neighboring Rostov region in Russia, in what is seen by many as part of the widespread effort to boost turnout at the controversial plebiscite.

On Friday morning, dozens of people gathered at a bus station in Donetsk, a rebel-controlled city in eastern Ukraine, waiting to get on a bus to Russia. Some of the voters told The Associated Press that the constitutional changes would boost the powers of the Russian authorities and bring peace to the separatist region in eastern Ukraine. Others expressed hope that the changes would allow separatist republics to become part of Russia.

Polls opened in Russia last Thursday for a week-long vote on a slew of constitutional amendments proposed by Putin in January. The amendments include a change in the Russian Constitution that would allow the 67-year-old Putin, who has ruled Russia for over two decades, to run for two more six-year terms after his current one expires in 2024.

Russian authorities this month have gone to great lengths to lure voters to polling stations amid the coronavirus outbreak. Allowing residents of eastern Ukraine to participate is part of this effort, independent foreign affairs analyst Vladimir Frolov said.

“(Russian authorities) are obsessed with the results (of the vote),” and rebel-controlled areas in eastern Ukraine can contribute some “manageable voting,” he said.

Over 220,000 Ukrainians living in areas held by Russia-backed rebels received Russian passports last year, after Putin signed a decree expediting citizenship applications from residents of the self-proclaimed republics. The move had been widely condemned as an attack on Ukraine’s sovereignty that could undermine efforts to end a separatist conflict that has killed more than 14,000 since 2014.

More than 150,000 residents of eastern Ukraine have expressed a desire to cast a ballot in the vote on the constitutional reform, Russian lawmaker Victor Vodolatsky told the state Tass news agency last week.

Russia’s borders have been closed since late March because of the coronavirus outbreak but there are procedures to allow Russian citizens to enter, Kremlin spokesman Dmitry Peskov said Friday, commenting on the fact that voters from eastern Ukraine are able to travel to Russia.

According to separatist officials, there are 12 polling stations in the Rostov region where residents of eastern Ukraine can vote. The regional election commission confirmed to the AP that polling stations for Russian citizens not registered as residents were operating all across the region.

Russian election monitors point out that bringing residents of eastern Ukraine into Russia to vote could make it easier to rig the vote. Non-resident voters are not registered with a specific polling station, and with several stations operating in the Rostov region, it will be difficult to verify that they haven’t voted several times at different polls, said Vladimir Yegorov, coordinator of election monitoring with the Golos independent election watchdog.

“The vote lasts seven days, and a person, if they so wish, can vote several times at several polling stations, and there is no way to control it,” Yegorov said. 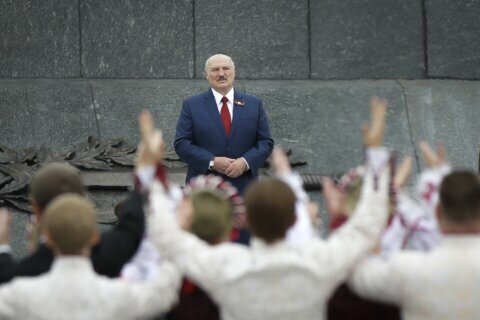