The appellate ruling marked the first time the court’s prosecutor has been cleared to investigate U.S. forces, and set the global tribunal on a collision course with the Trump administration.

Prosecutor Fatou Bensouda pledged to carry out an independent and impartial investigation and called for full support and cooperation from all parties.

“The many victims of atrocious crimes committed in the context of the conflict in Afghanistan deserve to finally have justice,” Bensouda said. “Today they are one step closer to that coveted outcome.”

Washington, which has long rejected the court’s jurisdiction and refuses to cooperate with it, condemned the decision while human rights groups and lawyers for victims applauded it.

“This is a truly breathtaking action by an unaccountable political institution masquerading as a legal body,” U.S. Secretary of State Mike Pompeo said at a State Department briefing. “It is all the more reckless for this ruling to come just days after the United States signed a historic peace deal on Afghanistan, which is the best chance for peace in a generation.”

His comments reflect long-held distrust of the ICC by the U.S. government. In 2018, then-National Security Adviser John Bolton said the court — established in 2002 to prosecute atrocities throughout the world — ” unacceptably threatens American sovereignty and U.S. national security interests.”

A five-judge appellate panel upheld an appeal by prosecutors against a pretrial chamber’s rejection in April last year of Bensouda’s request to open a probe in Afghanistan.

While acknowledging that widespread crimes have been committed in Afghanistan, pretrial judges had said an investigation wouldn’t be in the interests of justice because the expected lack of cooperation meant convictions would ultimately be unlikely.

That decision drew fierce criticism from rights organizations who said it neglected the desire of victims to see justice in Afghanistan and effectively rewarded states that refused to cooperate with the Hague-based court.

Even though an investigation has now been authorized, the prospect of suspects appearing in court in The Hague any time soon remains dim. Like the United States, Afghanistan also opposed the investigation.

Rights groups, however, welcomed the decision.

“The ICC Appeals Chamber’s decision to green light an investigation of brutal crimes in Afghanistan despite extreme pressure on the court’s independence reaffirms the court’s essential role for victims when all other doors to justice are closed,” said Param-Preet Singh, associate international justice director at Human Rights Watch.

She added that the decision “also sends a much-needed signal to current and would-be perpetrators of atrocities that justice may one day catch up to them.”

At a hearing in December, prosecutors argued that pretrial judges at the global court overstepped their powers by blocking the investigation. The appeals judges agreed.

“The Appeals Chamber considers it appropriate to amend the appealed decision to the effect that the prosecutor is authorized to commence an investigation,” Presiding Judge Piotr Hofmanski said.

After a preliminary probe in Afghanistan that lasted more than a decade, Bensouda asked judges in November 2017 to authorize a far-reaching investigation.

She said there is information that members of the U.S. military and intelligence agencies “committed acts of torture, cruel treatment, outrages upon personal dignity, rape and sexual violence against conflict-related detainees in Afghanistan and other locations, principally in the 2003-2004 period.”

Katherine Gallagher, Senior Staff Attorney at the Center for Constitutional Rights, who represents a group of victims of U.S. detention, said the decision “breathed new life into the mantra that ‘no one is above the law’ and restored some hope that justice can be available — and applied — to all.”

Gallagher represented two men still being held in U.S. detention at Guantanamo Bay, Sharqawi Al-Hajj and Guled Duran, and the wife of a third man who has died.

Bensouda alleges that the Taliban and other insurgent groups have killed more than 17,000 Afghan civilians since 2009, including some 7,000 targeted killings, and that Afghan security forces are suspected of torturing prisoners at government detention centers.

At a December hearing, the government of Afghanistan objected to the investigation and said it had set up a special unit to investigate war crimes. The ICC is a court of last resort that only takes on cases if domestic jurisdictions are unable or unwilling to prosecute.

Pompeo said the United States “will take all necessary measures to protect out citizens from this renegade, unlawful, so-called court. This is yet another reminder of what happens when multilateral bodies lack oversight and responsible leadership and become instead a vehicle for political vendettas.”

“No one except the world’s most brutal regimes win when the United States tries to impugn and sabotage international institutions established to hold human rights abusers accountable,” Dakwar said.

The Coalition for the International Criminal Court, a nongovernmental advocacy organization, called on the tribunal’s 123 member countries states to support it.

“ICC States Parties must stand firm in solidarity with the court and urge the U.S. government not to attack individuals who work to bring alleged war criminals to justice,” Legal Officer Ricardo Izquierdo said. 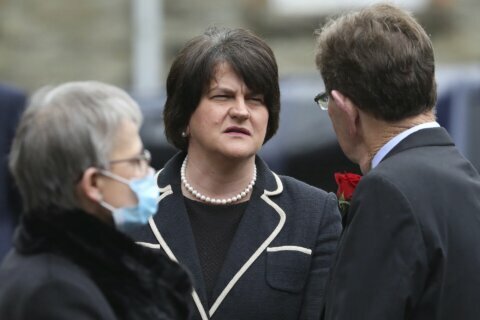 Bulgaria: PM Borissov offers to step down to save government