PARIS (AP) — France’s Health Minister Agnes Buzyn was named on Sunday as a new candidate for mayor of Paris, a late entry by the country’s governing party after a scramble to replace the original contender who abruptly withdrew after a leak of sex videos on social media.

The choice of Buzyn, whose profile rose with the outbreak of the new deadly virus from China, came just two days after a frantic search for a candidate began. It underscored the importance that President Emmanuel Macron’s centrist party places on winning the mayor’s office — and emerging from a scandal.

The presidential Elysee Palace quickly named a replacement for Buzyn as health minister, Olivier Veran, a lawmaker and a doctor, like his predecessor.

The post of mayor of Paris is currently held by Anne Hidalgo, a Socialist looking to renew her term and favored in polls in the two-round municipal elections to be held in one month.

The rapid changing of the guard in the important health ministry post came after the withdrawal of Benjamin Griveaux as candidate in the Paris mayoral race after explicit videos began circulating on social media, a leak operation claimed by a controversial Russian performance artist.

Piotr Pavlensky and his companion, meanwhile, were being questioned by police investigators on counts of invasion of privacy and diffusing without permission images of a sexual character after Griveaux filed a complaint for invasion of privacy. The prosecutor’s office said Sunday that the period of interrogation was being prolonged for both until Monday.

Pavlensky claimed responsibility for the leaks, denouncing the “big hypocrisy” of Griveaux who put family at the forefront of his campaign.

Pavlensky’s lawyer, Juan Branco, who had defended in the past Wikileaks figure Julien Assange, said on TV he was forced to withdraw from the case. The prosecutor’s office would not confirm the claim.

The mayorship of the French capital is a symbol of prestige, and more. For Macron’s young party, The Republic on the Move, which he created to win the presidential race in 2017, a Paris victory could compensate for losses elsewhere around the country.

“I am doing this with my heart, with commitment … I’m doing it to win,” Buzyn said shortly after being named the governing party contender, reflecting a dramatic change of heart. On Friday, she said she would refuse to take Griveaux’s place, citing her important work amid the COVID-19 which has sickened 12 people in France.

“Mission impossible,” was the message of numerous commentators, noting the Paris-born Buzyn’s late arrival in the race and the embarrassing stumbles that preceded her. Rival parties said she was “abandoning” her ministerial post amid a health crisis.

The addition of Buzyn puts three women front and center in the battle for Paris, with conservative former Justice Minister Rachida Dati polling in second place, after the current mayor.

The scandal over the sexually explicit material has led to questions over whether Pavlensky had been a front man for more sinister forces wanting to bring down Griveaux and about the role of social media in a democracy. The affair also has raised indignation across political classes in a country that respects the private lives of politicians.

Hungary’s Orban strikes back at EU criticism on extra powers 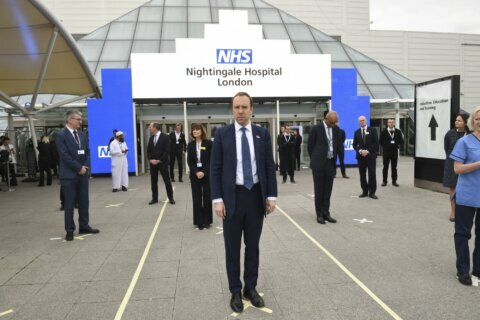