BERLIN (AP) — German police raided premises in four states early Tuesday on suspicion that a group of Chechens were scouting locations for a possible attack that may have included a synagogue, officials said.

Berlin prosecutors said some 180 officers took part in the raids at nine sites in the German capital and the states of Brandenburg, North Rhine-Westphalia and Thuringia.

In a statement, prosecutors said the five suspects, who are aged between 23 to 28, are accused of “having scouted out locations for a possible later attack motivated by Islamism.”

“According to current information there was no concrete threat of an attack yet,” prosecutors added.

Martin Steltner, a spokesman for Berlin prosecutors, said authorities acted after discovering photographs, including of a synagogue and a shopping mall, on one suspect’s cellphone during a police check. He declined to say where the photographs were taken.

Later Tuesday prosecutors said the evidence collected so far wasn’t sufficient to justify arrest warrants against the five suspects, but that the material seized in the raids — which included knives, cash and data storage devices — was now being reviewed.

Two passers-by were killed last year when a suspected far-right extremist tried to attack a synagogue in the eastern city of Halle. 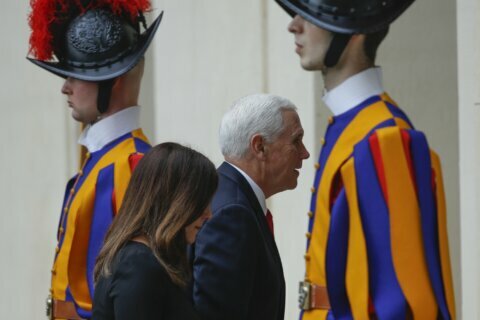 US Vice President Pence to Pope Francis: you made me a hero