Prime Minister Boris Johnson’s Conservative Party has won a thumping majority of seats in Britain's Parliament — a decisive outcome to a Brexit-dominated election that should allow Johnson to fulfill his plan to take the U.K. out of the European Union next month.
Listen now to WTOP News WTOP.com | Alexa | Google Home | WTOP App | 103.5 FM
(1/22) 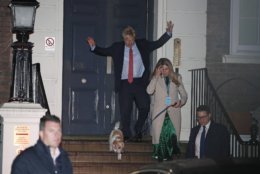 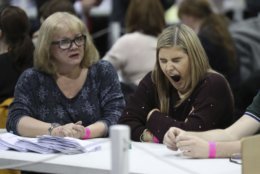 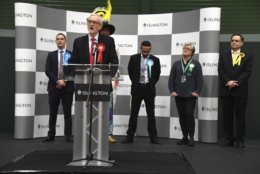 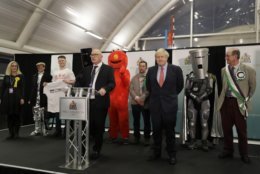 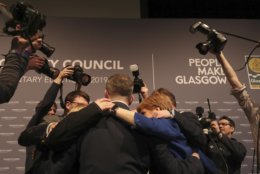 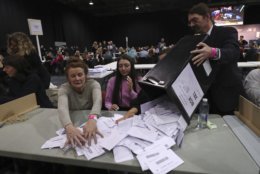 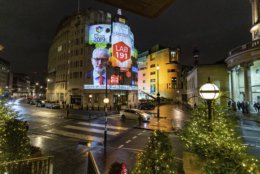 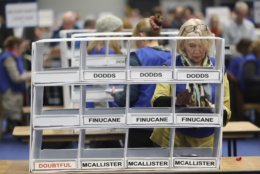 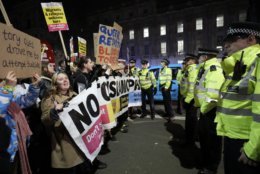 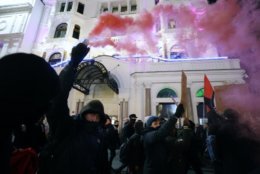 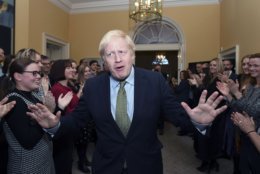 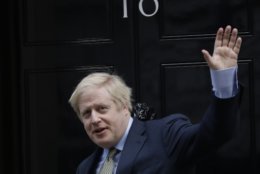 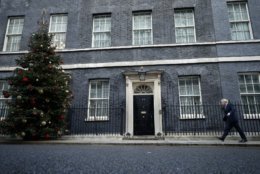 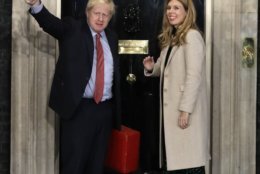 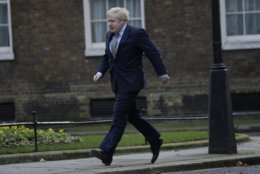 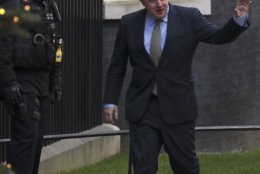 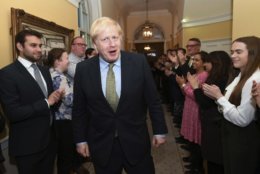 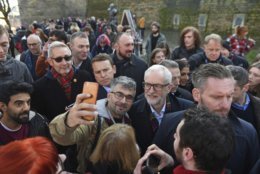 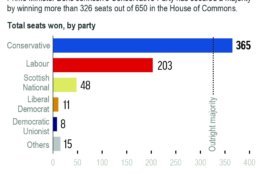 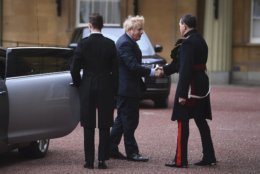 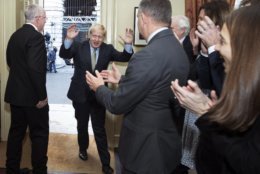 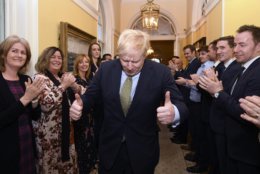 LONDON (AP) — Prime Minister Boris Johnson pledged Friday to heal Britain’s divisions over Brexit after his gamble on early elections rewarded him with a commanding majority in Parliament and a new mandate to take his country out of the European Union at the end of January.

Johnson’s promise to “get Brexit done” and widespread unease with the leadership style and socialist policies of opposition leader Jeremy Corbyn combined to give the ruling Conservative Party 365 seats in the House of Commons, its best performance since party icon Margaret Thatcher’s last victory in 1987. Corbyn’s Labour Party slumped to 203 seats, 59 fewer than it won two years ago, vote totals showed Friday.

The results offer Johnson fresh momentum to push his EU withdrawal agreement through Parliament. Since taking office in July, he had led a minority government. After the House of Commons stalled his Brexit deal at the end of October, he called the election two years ahead of schedule in hopes of winning a clear majority.

“I will put an end to all that nonsense, and we will get Brexit done on time by the January 31 – no ifs, no buts, no maybes,” he said as supporters cheered.

Johnson also offered an olive branch to Britons who want to remain in the EU, saying he will respect their “warm feelings” and build a “new partnership” with the bloc as “friends and sovereign equals.”

Speaking Friday outside 10 Downing Street, he pledged to end acrimony over Brexit and urged the country to “let the healing begin.” He said he would work to repay voters’ trust.

Key leaders in Europe, signaled that they, too, were willing to start anew. French President Emmanuel Macron said it was time to build a common future.

“I also want to tell our British friends and allies something very simple: By this general election, you have confirmed the choice made more than three years ago, but you are not leaving Europe,” he said. “Our history, our geography, our values tie us beyond the twists and turns, difficulties or disappointments.”

U.S. President Donald Trump congratulated Johnson on “a tremendous victory,” and said he looked forward to a new trade deal with Britain.

“It’s going to be a great thing for the United States also, because it means a lot of trade, a tremendous amount of trade,” Trump told reporters in the Oval Office. “They want to do business with us so badly.”

The scale of Johnson’s success marked a stinging defeat for Corbyn, who had promised to lead Labour to victory with the “biggest people-powered campaign our country has ever seen.”

Instead, voters rejected his attempt to bridge divisions over Brexit by promising a second referendum on any deal with the EU. The vote also turned away the rest of the party’s agenda, which included promises to raise taxes on the rich, increase social spending and nationalize industries such as water delivery, railroads and the Royal Mail.

Corbyn, who spent his entire career as a backbench gadfly until unexpectedly winning a party leadership election in 2015, was criticized for silencing critics within the party and failing to root out anti-Semitism among his supporters. Centrist Labour politicians were quick to call for Corbyn to step down, though he has said he will stay on during a period of “reflection” and that an internal election to choose a new leader would take place early next year.

“Obviously, it is a very disappointing night for the party,” he said after retaining his own seat in Parliament. ”But I want to say this: In the election campaign, we put forward a manifesto of hope. However, Brexit has so polarized debate it has overridden so much of normal political debate.”

Phil Wilson, the former Labour lawmaker who lost his seat to the Conservatives, said blaming the party’s wipeout on Brexit was “mendacious nonsense.”

Corbyn’s leadership “was a bigger problem,” he tweeted. “To say otherwise is delusional. The party’s leadership went down like a lead balloon on the doorstep. Labour’s leadership needs to take responsibility.”

Johnson owes his success, in part, to traditionally Labour-voting working class constituencies in northern England that backed the Conservatives because of the party’s promise to deliver Brexit. During the 2016 referendum, many of those communities voted to leave the EU because of concerns that immigrants were taking their jobs and neglect by the central government in London.

Early in the campaign, pundits said the election would turn on these voters, who were dubbed the “Workington man” after the onetime steel-making community in northwestern England.

The Conservatives won Workington on Thursday by more than 4,000 votes. The constituency had supported Labour candidates since 1918, with only one short interruption in the 1970s.

“I think that people have lost hope in Labour,” said Nicki Lawal, 24, who lives in London’s Brixton neighborhood.

Mathew Goodwin, a professor of politics at the University of Kent, said Johnson matched a bit of leaning to the left on the economy with a similar lean to the right on Brexit, migration and crime.

Johnson “appears to have grasped one of the new unwritten laws in politics: It is easier for the right to move left on economics than it is for the left to move right on identity and culture,” he wrote on his blog.

The question now is whether the Conservatives can address the economic and social concerns of these voters and hold on to their support in future elections.

Conversely, some traditionally Conservative-supporting communities in southeastern England flipped to Labour as the pro-EU sentiments of middle class voters outweighed other issues.

The next flashpoint for U.K. politics may be Scotland, where the Scottish National Party won 48 of the 59 seats that were up for grabs on Thursday.

SNP leader Nicola Sturgeon delivered the landslide victory with a campaign focused on demands for a second referendum on Scottish independence. Johnson has flatly rebuffed the idea of another vote, saying Scotland already rejected independence in 2014.

Sturgeon argues that the U.K.’s decision to leave the EU against the wishes of the Scottish people has materially changed the landscape. Some 62 percent of Scottish voters backed remaining in the EU during the 2016 referendum on membership.

“It is the right of the people of Scotland. And you, as the leader of a defeated party in Scotland, have no right to stand in the way,” she said. She plans to publish a case next week for a transfer of power that would clear the way for a second independence vote.

Johnson’s sweeping success will give him room to maneuver on such issues, particularly involving the fraught details of Brexit. Jim O’Neill, chairman of the Chatham House think tank, said the size of the Conservative Party victory gives it a clear mandate to execute the first stage of departing the EU by passing the withdrawal bill.

It also allows the government to “explore its future trade relationship with the EU with more time” and extends the transition period, he said ”Even more importantly, in principle, this majority gives the prime minister the leeway to be bold and reveal his true desires for both domestic and global Britain.” 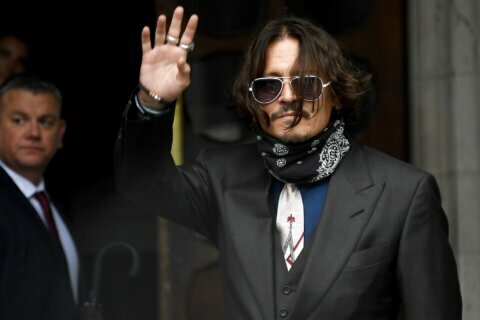 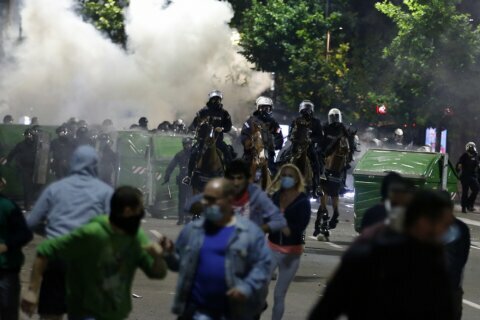 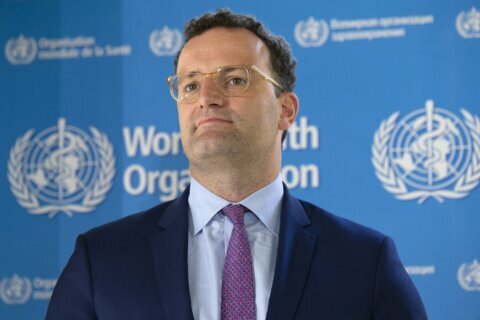 Criticism of US pullout from WHO from allies, China alike