PARIS (AP) — The presidents of Ukraine and Russia agreed Monday to revive the peace process on the bloody separatist conflict in eastern Ukraine and exchange all their prisoners, but they failed to resolve crucial issues such as a timeline on local elections and control of the borders in the rebel-held region.

At the first meeting between new Ukrainian President Volodymyr Zelenskiy and Russian President Vladimir Putin, the two leaders failed to find a compromise to bring an end to the 5-year-old war that has killed 14,000 people, emboldened the Kremlin and reshaped European geopolitics.

But they did agree to try again in four months to find new solutions, said French President Emmanuel Macron, who mediated the talks along with German Chancellor Angela Merkel and called them “fruitful” in that it brought all four leaders together.

“There are disagreements, especially on timeline and next steps. We had a very long discussion on this,” Macron said at a news conference after the talks in the Elysee palace.

The talks focused on reviving a largely stalled 2015 peace agreement intended to end fighting between Ukrainian troops and Russia-backed separatists in eastern Ukraine.

Putin said they agreed that there was no alternative to the 2015 accord reached in the Belarusian capital of Minsk. He emphasized that Ukraine should quickly extend a law giving wide autonomy to the rebel-held regions in line with the deal and also approve a legislation granting amnesty to the rebels.

He added that in addition to the prisoner swap, agreement was reached to continue pulling back troops in other areas in the east, clear mines there and remove fortifications.

Zelenskiy acknowledged many previous cease-fire deals didn’t hold but he added that “this time we agreed to treat it seriously.”

“I’m convinced that if all parties want it strongly, we will be able to implement it,” he said.

Ukraine and Russia conducted several rounds of prisoner exchange, most recently in September. Monday’s deal goes further, envisaging a blanket “all for all” exchange of all known prisoners held by Ukraine and the rebels.

Zelenskiy made a particular emphasis on that.

“I would very much like our people to come home in time to spend the New Year holidays with their families,” Zelenskiy said after the talks.

But there was little clarity on the key contentious issues — autonomy for the east and control of the border.

Russia wanted the summit to increase pressure on Zelenskiy to fulfill the 2015 Minsk peace accord, which promises wide autonomy to Ukraine’s rebel-held regions.

The Minsk deal puts forth that Ukraine can regain control over the border with Russia in the separatist-held regions only after they are granted a broad self-rule and hold local elections.

In particular, it stipulates that the Ukrainian law should allow municipal authorities in the east to appoint judges and prosecutors in the region and form local police. It notes that the law should also provide for an amnesty for those who took part in the fighting. Those provisions were anathema to many in Ukraine.

The 2015 deal was a diplomatic coup for Russia, ensuring that the rebel regions get a broad authority and resources to survive on their own without cross-border support.

Zelenskiy wants to tweak the timeline laid out in the accord, which calls for Ukraine to be able to regain control of its border with Russia only after local elections are held in the separatist regions and the regions receive autonomous status. He says Ukraine must get control of its border first before local elections are held, but the Kremlin insists that’s not an option.

The summit was the biggest test yet for Zelenskiy, a comic actor and political novice who won the presidency this year in a landslide — partly on promises to end the war.

Macron praised Zelenskiy’s courage and determination, adding that he made “gestures” that allowed peace talks to be relaunched.

A major breakthrough at the Paris talks had been seen as unlikely, and Ukrainian protesters in Kyiv had put pressure on their new leader not to surrender too much to Putin, who has been in office nearly 20 years.

While opinion surveys have shown an overwhelming support for Zelenskiy’s peace efforts, a minority opposing them is highly-mobilized and energetic. Thousands rallied on Kyiv’s man square Sunday to warn him against making any concessions, and some set up a tent camp around his headquarters. Cries of “shame”!” and whistles of derision greeted announcements from the leaders’ news conference in Paris.

“We didn’t see any real steps — Putin did not promise control of the border or the withdrawal of his troops,” 38-year-old demonstrator Nina Onufrik said.

Despite the 2015 peace agreement, Ukrainian soldiers and Russia-backed separatists have continued to exchange fire.

Germany and France helped to broker the Minsk accord, in hopes of ending a conflict on Europe’s eastern edge that has complicated relations with Russia, a powerful trading partner and diplomatic player.

But with progress stalled, the leaders haven’t met since 2016. Ukraine and Russia struck a prisoner exchange deal in September and agreed on a troop and heavy weapons pullback from two locations in eastern Ukraine. Russia has also released three Ukrainian navy ships that were seized a year ago.

While Zelenskiy still enjoys broad public support, he has been embarrassed by the scandal around his discussions with U.S. President Donald Trump that have unleashed an impeachment inquiry in Washington. The U.S. is an important military backer for Ukraine, which is hugely out-gunned by Russia.

While the U.S. was never part of this peace process, U.S. backing has strengthened Ukraine’s overall negotiating position with Russia in the past. Now that support is increasingly in doubt, after the Trump administration froze military aid earlier this year and is increasingly focused on Trump’s re-election bid. With U.S. influence waning around the world, many in Kyiv see one clear winner: Russia.

Russia denies providing troops and weapons to help the separatists but has maintained political support and sent aid. It argues that people in eastern Ukraine feel stronger cultural and linguistic ties with Russia than with Western-leaning Kyiv.

The Kremlin hopes that an end to the conflict could also lead to the eventual lifting of EU sanctions against Russia linked to the fighting, which European businesses have pushed for. The EU and U.S. imposed separate sanctions on Russia over its annexation of Ukraine’s Crimean Peninsula in 2014.

The EU is expected to extend sanctions this week by another six months. Arriving for meetings in Brussels on Monday, German Foreign Minister Heiko Maas said: “At the moment I see no grounds to change anything in the European Union’s sanctions policy toward Russia in this matter. It would be good if we could get there at some point.”

Macron and Merkel said they agreed to intensify the monitoring by the Organization for Security and Cooperation in Europe, which is now only active for 12 hours a day and conduct it 24 hours a day. 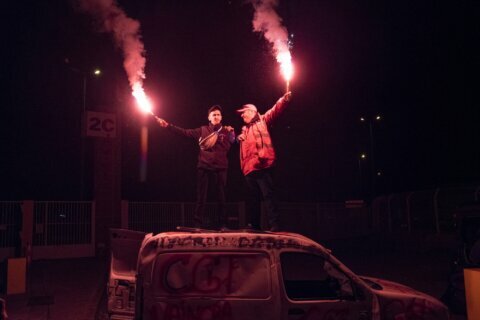 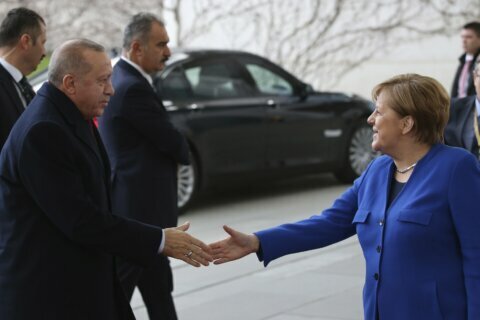