MOSCOW (AP) — For new Ukrainian President Volodymyr Zelenskiy, a summit meeting with Russia, France and Germany marks a decisive moment in his push to end more than five years of fighting with Moscow-backed separatists in the eastern part of his country. While the Kremlin may share that objective, there are fears in Ukraine that Zelenskiy, a political novice, could give up too much.

Elected in April, the comic actor-turned-politician has said resolving the conflict that has killed more than 14,000 people was his chief priority. Monday’s summit in Paris, where he will meet with Russian President Vladimir Putin for the first time, has generated hopes for them to reach a lasting cease-fire.

In a recent video that he recorded in a gym, Zelenskiy argued that trying to end the bloodshed without speaking directly to Russia was similar to working out on a treadmill.

“Some say we can do without such dialogue,” he said. “But it’s like running this treadmill — you are doing something, you are losing calories, but you remain in place.”

The summit comes as a crucial test for Zelenskiy, who also has become embroiled in an impeachment inquiry by the U.S. Congress of President Donald Trump.

In a July 25 phone call, Trump pressed the Ukrainian to investigate political rival Joe Biden, while the White House was withholding about $400 million in essential military aid to Kyiv. The suspension fueled fears among Ukrainians that Washington was turning its back on them or forcing them into a weakened position with Russia.

Zelenskiy has been seeking a meeting with leaders of Russia, France and Germany for months. The first such session was held in Normandy, France, in 2014, shortly after Moscow threw its support behind the separatists in the Donbass industrial region in eastern Ukraine. The conflict erupted weeks after Moscow annexed Ukraine’s Crimean Peninsula following the ouster of the country’s Russia-leaning president earlier that year.

The U.S. and the European Union responded with an array of sanctions against Russia, making the prospect of lifting them contingent on a peace deal that was brokered by France and Germany. The 2015 agreement, which was signed in the Belarusian capital of Minsk after a series of battlefield defeats suffered by Ukrainian troops, envisaged a wide autonomy for the separatist regions in a diplomatic coup for Russia.

The Minsk accord met the Kremlin’s goal of securing self-rule for the rebel regions that would allow Moscow to control its neighbor and dampen Ukraine’s aspirations to join NATO.

The document, which was negotiated by Zelenskiy’s predecessor, Petro Poroshenko, outraged many in Ukraine. Its provisions for autonomy of the rebel-held territory and a sweeping amnesty for the separatists were never implemented. Sporadic fighting has continued in the east despite the peace deal, blocking attempts at a political settlement.

Now Putin intends to use the Paris summit to raise the pressure on Zelenskiy to fulfill the Minsk deal, counting on support from French President Emmanuel Macron, who has signaled a desire to normalize ties with Russia. If the 2015 agreement is implemented, it could pave way for a relief from the EU sanctions while allowing Moscow to keep leverage over Ukraine.

Putin and his lieutenants have warned that Moscow won’t accept any changes in the Minsk document, particularly on the most sensitive issue of border controls. Under the 2015 agreement, Ukraine could only regain control of the frontier with Russia in the rebel-held territories after those regions hold local elections and receive autonomous status. Pro-Moscow sentiment runs high in those areas, especially the provincial capitals of Donetsk and Luhansk.

“Russia wants the Minsk implemented the way it was formulated and with the logic of the border coming last,” Trenin said. “Putin isn’t going anywhere to lose.”

He noted that even though Putin realizes that it’s hard for Zelenskiy to implement the Minsk deal for domestic reasons, the Russian leader “wants to show the Europeans his good faith, his commitment to Minsk, his preparedness to walk his part of the way to reach an agreement.”

Zelenskiy said the Minsk deal was bad for Ukraine and vowed to try to revise it, saying he will push for quickly regaining control of the border and demanding the withdrawal of Russian soldiers from the rebel-held territories. The Kremlin has denied that any Russian troops are in Ukraine.

Vyacheslav Nikonov, the head of education committee in the lower house of Russian parliament, argued that the Minsk agreement is “the only thing that keeps Donbass inside Ukraine.” He warned that if Ukraine rejects the Minsk deal, as some in Kyiv had suggested, “that means Donbass will become free.”

“For Zelenskiy, the only chance to achieve some progress is to keep up with the Minsk accords,” Nikonov said.

Many in Ukraine fear that Putin, who has been in power for nearly 20 years, could easily outmaneuver the Ukrainian rookie politician.

“Zelenskiy risks being left alone against the three others, with the leaders of France and Germany playing on the Russian side,” said Vadim Karasev, head of the Kyiv-based Center for Global Strategies. “The Minsk agreements left Kyiv little choice — to re-integrate Donetsk and Luhansk on Russian conditions and get a ‘Trojan horse,’ or lose those territories in a frozen conflict.”

Karasev noted that Zelenskiy will try to avoid any radical moves, fearing a backlash from Ukrainian right-wingers and radical nationalists who strongly oppose any rapprochement with Russia. He said the Paris talks could yield some incremental results — such a deal to exchange prisoners or troops pulling back from the front line — but no breakthrough.

Volodymyr Fesenko, head of the Penta think-tank, predicted Zelenskiy will come under strong pressure from those who oppose any deal with Russia irrespective of the outcome of the talks.

“Even if Zelenskiy doesn’t sign anything, he will face suspicions and accusations,” Fesenko said. “And if he reaches agreements on troops’ pullback, they will accuse him of capitulation.”

The political party of Poroshenko, the former president, and other opposition groups scheduled a rally in Kyiv for Sunday to warn Zelenskiy against making any concessions.

A nationwide poll last month showed 75 percent of respondents backing them. The poll of 2,041 people, conducted by the Democratic Initiatives foundation and the Kyiv International Institute of Sociology, had a margin of error of 2.3 percentage points. 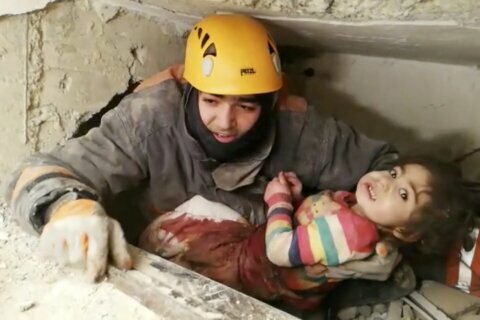