LONDON (AP) — The Polish porter who fought off a knife-wielding attacker in the London Bridge stabbings said Tuesday that he acted instinctively in trying to prevent others from being hurt.

In a statement issued by London’s Metropolitan Police, the man identified only as Lukasz said he had gone to work as normal at Fishmongers Hall “when the unimaginable and tragic terrorist attack happened.”

Usman Khan stabbed two people to death and injured three others Friday before being shot and killed by police on the bridge.

Earlier accounts of the incident suggested that Lukasz had prodded Khan with a narwhal tusk that had been ripped from the wall of the hall. But Lukasz said the person shown in some video of the day was not him.

“I and several others tried to stop a man from attacking people inside the building,” he said. “I did this using a pole I found. Someone else was holding a narwhal tusk.”

Khan was attending an event at the hall and had returned for the afternoon session when he started stabbing people. Police believe he acted alone.

He was pursued onto London Bridge and restrained by staff from the venue and others from the conference, including former inmates. Police shot him after he flashed what looked like a suicide vest. It turned out to be fake.

“The man attacked me, after which he left the building,” he said. “A number of us followed him out but I stopped at the bollards of the bridge. I had been stabbed and was later taken to hospital to be treated. I am thankful that I have now been able to return home.”

Khan’s family said Tuesday they were “saddened and shocked” by what he did.

Khan’s relatives also issued a statement through the police, saying that the “totally condemn his actions and we wish to express our condolences to the families of the victims that have died and wish a speedy recovery to all of the injured.”

Khan had been released from prison last year after serving eight years for an al-Qaida-linked plot to set up a training camp in Pakistan. 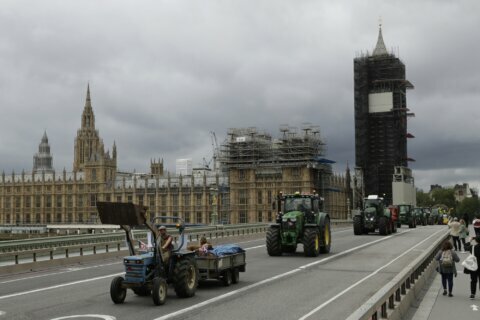