NICOSIA, Cyprus (AP) — The head of the United Nations on Monday sought to inject some momentum into efforts to revitalize moribund talks on reunifying ethnically split Cyprus, saying he will continue work on finalizing terms for a fresh round of negotiations.

U.N. Secretary-General Antonio Guterres said he is looking to bring together Cyprus’ rival leaders and officials from the eastern Mediterranean island’s three “guarantors” — Britain, Greece and Turkey — for an informal meeting to reach consensus on those terms.

The terms will act as a guideline for negotiations to resume “at the earliest feasible opportunity” and aim at reaching a deal reunifying Cyprus as a federation “within a foreseeable horizon.”

Guterres said the leaders would first aim for a “strategic agreement” that would pave the way toward a comprehensive deal.

Cyprus was split along ethnic lines in 1974 when Turkey invaded following a coup by supporters of union with Greece. Only Turkey recognizes a declaration of independence by Turkish Cypriots in the country’s northern third where it keeps more than 35,000 troops.

Numerous U.N.-sponsored rounds of peace talks have ended in failure, including the latest in 2017 when negotiations at a Swiss resort involving top diplomats from the three guarantor countries collapsed.

“It’s acknowledged that this time must be different,” Guterres said in written statement issued after an informal meeting with Greek Cypriot President Nicos Anastasiades and Turkish Cypriot leader Mustafa Akinci in Berlin.

Both leaders hailed the meeting as nudging the process forward. Anastasiades called it a “first positive step” toward resuming negotiations while Akinci described it as putting the “derailed peace process back on track” that won’t go on endlessly.

The meeting may have offered some positive news after more than two years of stalemate, but key sticking points remain.

They include a Turkish demand for a continued troop presence on a reunified Cyprus and military intervention rights that Greek Cypriots reject.

The majority Greek Cypriots also oppose what they see as a Turkish Cypriot condition for veto powers in all decision-making on a federal level.

The Turkish Cypriot leader said he believed Guterres thought it necessary to personally re-engage in Cyprus peace efforts amid concerns that tensions over gas drilling in the east Mediterranean could escalate.

Turkey faces sanctions from the European Union for sending warship-escorted vessels to carry out exploratory drilling in waters were EU-member Cyprus has exclusive economic rights.

Turkey, which doesn’t recognize Cyprus as a state, opposes what it calls a “unilateral” Greek Cypriot gas search and says it is acting to protect its own interests and those of Turkish Cypriots to the area’s energy reserves and claims almost half of Cyprus’ exclusive economic zone.

Anastasiades repeated that Turkey must stop its illegal drilling off Cyprus and cease threatening the settlement of an uninhabited suburb under Turkish military control if substantial peace talks are to resume. 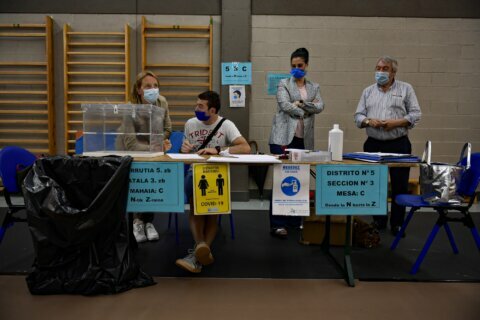