The Latest: Johnson says he can see ‘shape’ of a Brexit deal

LUXEMBOURG (AP) — The Latest on Brexit (all times local):

British Prime Minister Boris Johnson has said after a meeting with European Commission President Jean-Claude Juncker that “there is a good chance” of a Brexit deal with the European Union.

Johnson says “I can see the shape” of an agreement, but it will “require movement” from the EU.

The EU, in contrast, says Britain must move and produce concrete proposals to overcome differences over the Irish border that have so far blocked a deal. The European Commission says Britain has yet to offer any “legally operational” plans.

Johnson said he is serious about getting a deal by next month, “but if we can’t do it by then we will make sure we can come out on Oct. 31, deal or no deal.”

Johnson gave an on-camera statement outside the British Embassy in Luxembourg after a planned news conference alongside Prime Minister Xavier Bettel was scuttled by noisy protesters.

Luxembourg’s prime minister has urged British counterpart Boris Johnson to hurry up and make written proposals if he really wants to offer his country a path out of the Brexit impasse.

Xavier Bettel said after a meeting with Johnson that he told his British counterpart: “We need written proposals, so stop speaking (and) act. I hear a lot, but I don’t read a lot.”

Bettel and Johnson met in Luxembourg, where Johnson had a working lunch with European Commission President Jean-Claude Juncker. Johnson was initially expected to attend the open-air news conference, but skipped it at the last minute as noisy anti-Brexit protesters demonstrated near the podium.

Bettel also insisted it was the U.K.’s decision to leave the European Union, and therefore Britain couldn’t blame the EU for the situation the 2016 referendum has created.

Bettel added another delay to Britain’s planned departure from the bloc on Oct. 31 wouldn’t be ideal because Europeans citizens now seek “clarity.” He said the current situation is a “nightmare.”

The British government says Brexit negotiations with the EU will “intensify” in hope of striking a new divorce deal before the U.K.’s scheduled departure date of Oct. 31.

After a meeting between Prime Minister Boris Johnson and European Commission President Jean-Claude Juncker, Johnson’s office said “the discussions needed to intensify and that meetings would soon take place on a daily basis.”

It said talks would include not only officials but the two sides’ chief negotiators, Michel Barnier for the EU and Brexit Secretary Steve Barclay for the U.K.

Downing St. reiterated that Johnson wouldn’t request an extension to the Oct.31 deadline — even though Britain’s Parliament has passed a law requiring him to do just that if no deal is found.

The European Commission says it remains open to discussions with Britain to try and find a solution to the current Brexit impasse and is urging Prime Minister Boris Johnson to come up with viable solutions.

The European Union’s executive arm said “such proposals have not yet been made” during Monday’s working lunch between Johnson and European Commission President Jean-Claude Juncker in Luxembourg.

Johnson has repeatedly said the U.K. will leave the EU on the scheduled Oct. 31 date, with or without a withdrawal agreement. But he insists he can strike a revised divorce deal with the bloc in time for an orderly departure.

An influential European employers’ group says Britain’s departure from the European Union without a divorce deal would be a disaster and “should be definitely ruled out.”

BusinessEurope director Markus Beyrer said in a statement Monday that a no-deal Brexit would be “extremely harmful” for both the EU and Britain, causing “massive damage for citizens and businesses.”

British Prime Minister Boris Johnson, meeting Monday with European Commission President Jean-Claude Juncker in Luxembourg, Johnson has warned he wants Britain to leave the EU on Oct. 31 with or without a deal.

Beyrer, however, said he hopes Johnson will come up with new “viable” options for an orderly Brexit.

He insisted that “perpetuating uncertainty through another extension is far from ideal and does not bring a definitive solution. However, in view of the certainty of a disastrous no deal, this option should be considered as an alternative, if it is time-limited and the UK provides a clear path to a deal.”

The French minister for Europe says EU countries are ready to discuss new proposals from Britain for a new Brexit deal if they protect Northern Ireland’s peace deal and the bloc’s common market.

Speaking ahead of a meeting of EU ministers in Brussels, Amelie de Montchalin said it is essential that any amendment to the current proposed divorce deal should uphold the Good Friday Agreement, the treaty that ended decades of conflict in Northern Ireland.

Montchalin said “if some people have proposals to make — as the United Kingdom has hinted — we are ready to listen to them.”

The main sticking point over a deal is the so-called backstop, a mechanism which would require Britain to retain some EU rules in order to avoid a hard border between EU member Ireland and the U.K.’s Northern Ireland.

Montchalin said “the backstop is an insurance policy. If we can’t find anything better, it’s a way to organize ourselves in order to protect peace in Ireland and the common market.”

European Commission President Juncker and Johnson are holding talks Monday over a lunch of snails and salmon in Luxembourg.

Johnson says the U.K. will leave the EU on the scheduled Oct. 31 date, with or without a withdrawal agreement. But he insists he can strike a revised divorce deal with the bloc in time for an orderly departure. The agreement made by his predecessor, Theresa May, was rejected three times by Britain’s Parliament.

Johnson said in a newspaper column Monday that he believes “passionately” that a deal can be achieved. But the EU says it is still waiting for firm proposals from the U.K. 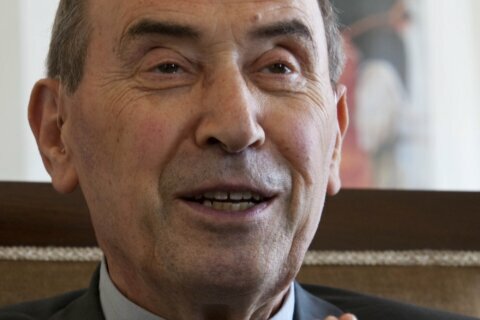